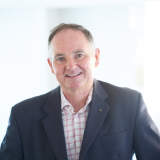 Councillor Clarke Martin was elected to Council in November 2016 and has been actively involved in the local community since moving to Beaumaris in 2003 with his wife Megan and their three children. Cr Martin and his family have been active members of the local primary and secondary schools, and various sporting clubs including netball, football, lifesaving, cricket, gymnastics and basketball. He is passionate about the benefits of bringing up children as part of a local community including the Beaumaris RSL.  Through his various committee roles and his role as a School Councillor, Cr Martin has been inspired to bring more people together to share a sense of belonging to neighbourhoods.

Cr Martin was a Clearance Diver with the Royal Australian Navy for 10 years, after which time he worked for 10 years in the offshore oil and gas commercial diving industry. He completed a Bachelor of Science degree, majoring in Health and Safety, and worked for 13 years at WorkSafe Victoria. He has gained extensive experience in senior management specialising in people leadership, strategic planning, project management and, most importantly to Cr Martin, the power of community consultation.

Cr Martin demonstrates a passion to ensure the cherished neighbourhood character homes and way of life are protected through effective governance. He has been actively involved in grassroots campaigns against various inappropriate developments, and maintaining residents’ amenities such as schools, clubs, open spaces and retail precincts.