Her own path: Jessie Traill

Brighton born artist Jessie Traill was an independent spirit who developed her artistic skills from an early age. She was one of the first women to practice printmaking in Australia and was crucial in the promotion of the medium. Below is a snapshot of Traill’s life and some of her important achievements.

Gain a unique insight into Jessie Traill by watching Jo Oliver, author of Jessie Traill: a Biography, discuss her life and work.

Jessie Constance Alicia Traill (1881-1967) was born on 29 July 1881 at ‘Westra’ in Brighton, Victoria, to an affluent family. As the youngest of four daughters to Jessie and George Hamilton Traill, she was free of responsibilities and had ample time to practice sketching from a young age. Brighton in the 1880s was full of bush scrub and it was here that her love affair with the outdoors began. In 1888 the family moved to ‘Glenmore’ in Sandringham where houses were set amongst market gardens and orchids and the family soon became friends with local artists Arthur Merric and Emma Minnie Boyd. As a child Jessie spent time in Europe, and her early experience of travel continued into her later years.

At around 10 years of age, Jessie had an encounter with Tom Roberts, who was painting at Black Rock where she had been playing on the beach. ‘The sight of an artist painting the landscape with which she was so familiar – the water of the bay, the grey-green foliage of the Australian bush and the intense light – had a lasting impact on Jessie and Roberts was to become an important friend and mentor who encouraged her to pursue an artistic career.[1] 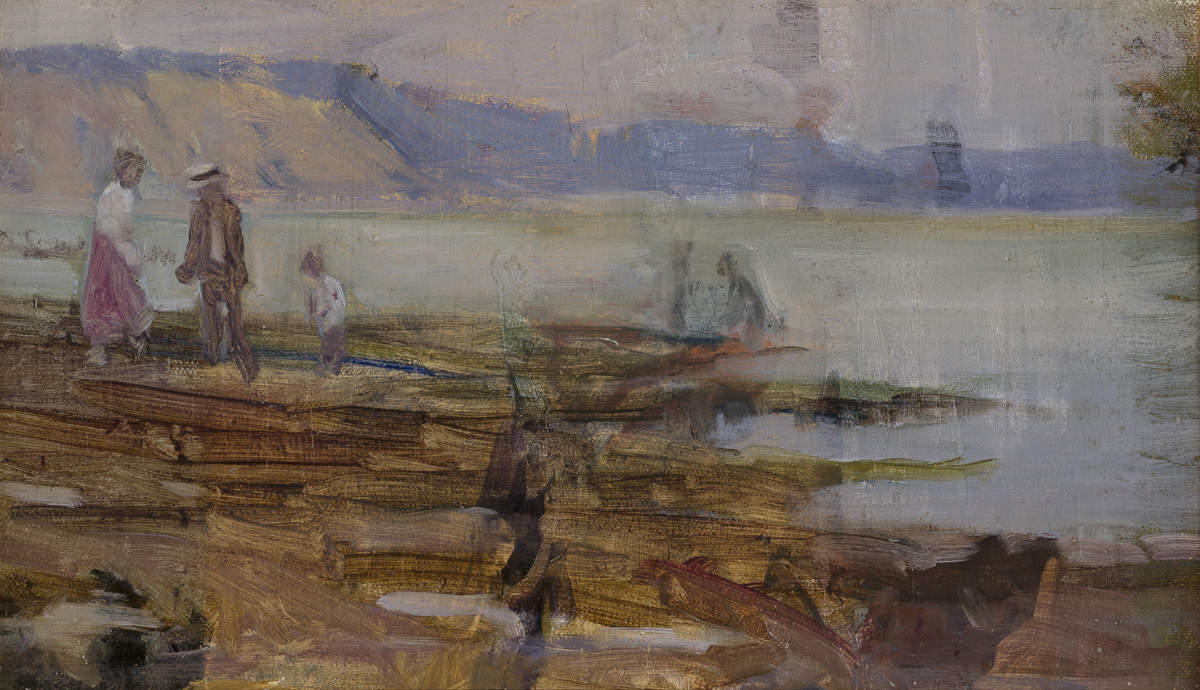 The above painting titled Beach scene, which is in the collection of Bayside City Council, depicts the coast at Black Rock in an impressionist manner. Figures in early 20th century outfits are dotted on the oxide rocky outcrops in the foreground and beyond the water the hazy Red Bluff cliff dominates the coast. It is a subject that many important Australian artists have recorded and forms part of Bayside’s Costal Art Trail.
View the art trail

Studies at home and abroad

While living in Sandringham, Jessie would commute into the city each day by train to attend the National Gallery Art School, located on Swanston Street in the small rooms of the National Gallery (now the State Library of Victoria), which she attended from 1901 until 1906. In 1902 she was awarded the school’s first prize for drawing anatomical figures. By 1903 she had also joined John Mather’s art school which encouraged plein-air painting that focussed on capturing the atmosphere of the landscape, a practice she maintained throughout her life. In that same year she also began etching classes with Mather, making her one of the first women to practice printmaking in Australia. It would become the medium in which Traill would have the greatest success. 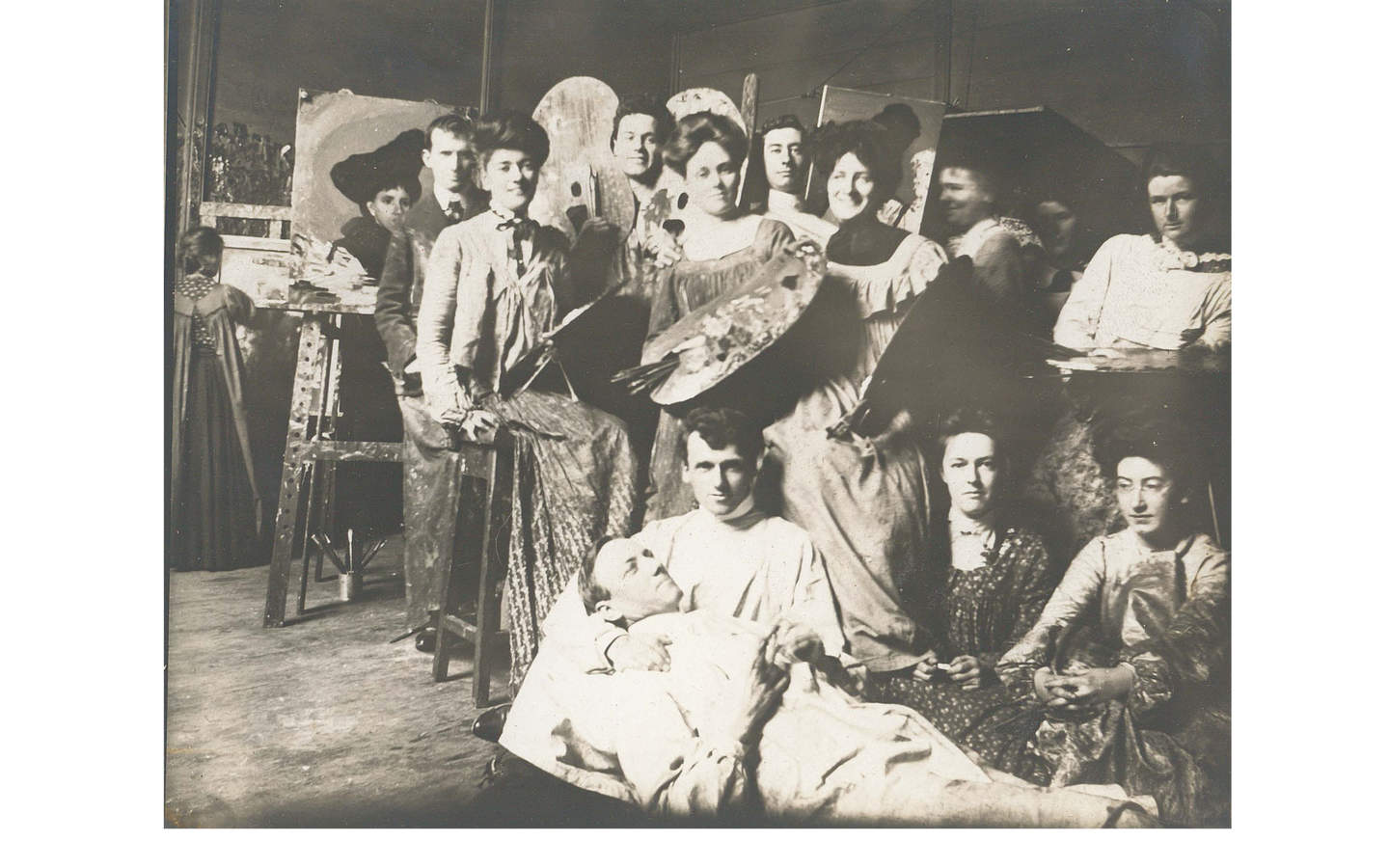 Motivated to further her etching studies in 1907, Jessie enrolled at the London School of Art under Frank Brangwyn, who encouraged her to work on larger and bolder compositions. Brangwyn favoured subject matter of industrial scenes of modern life such as buildings under construction, mines and machinery, and he advocated a dramatic use of chiaroscuro (strong contrasts between light and dark), which we see in the etching Under the bridge (1912) below. His teaching had a lasting impact on Traill.

By 1907 both of Traill’s parents had passed away, leaving a healthy inheritance to their daughters. Unmarried and financially independent, Jessie had the means and the freedom to pursue her career in art and travel regularly. In 1910 she rented a studio at Temple Court on Collins Street, where friends from her National Gallery Art School days, including Dora Wilson, Norah Gurdon, AME Bale and Janet Cumbrae Stewart also had rooms. Until the outbreak of WWI, Traill had a prolific output and exhibited regularly in solo and group exhibitions in Melbourne, receiving positive reviews in the press.

In 1915 she won a gold medal at the Panama Pacific International Exhibition in San Francisco for her etching Beautiful victims (1914) which depicts two men felling large gums in the Dandenongs. It represents Traill’s concern for the natural world and the disappearance of bushland in aid of industrial progress. 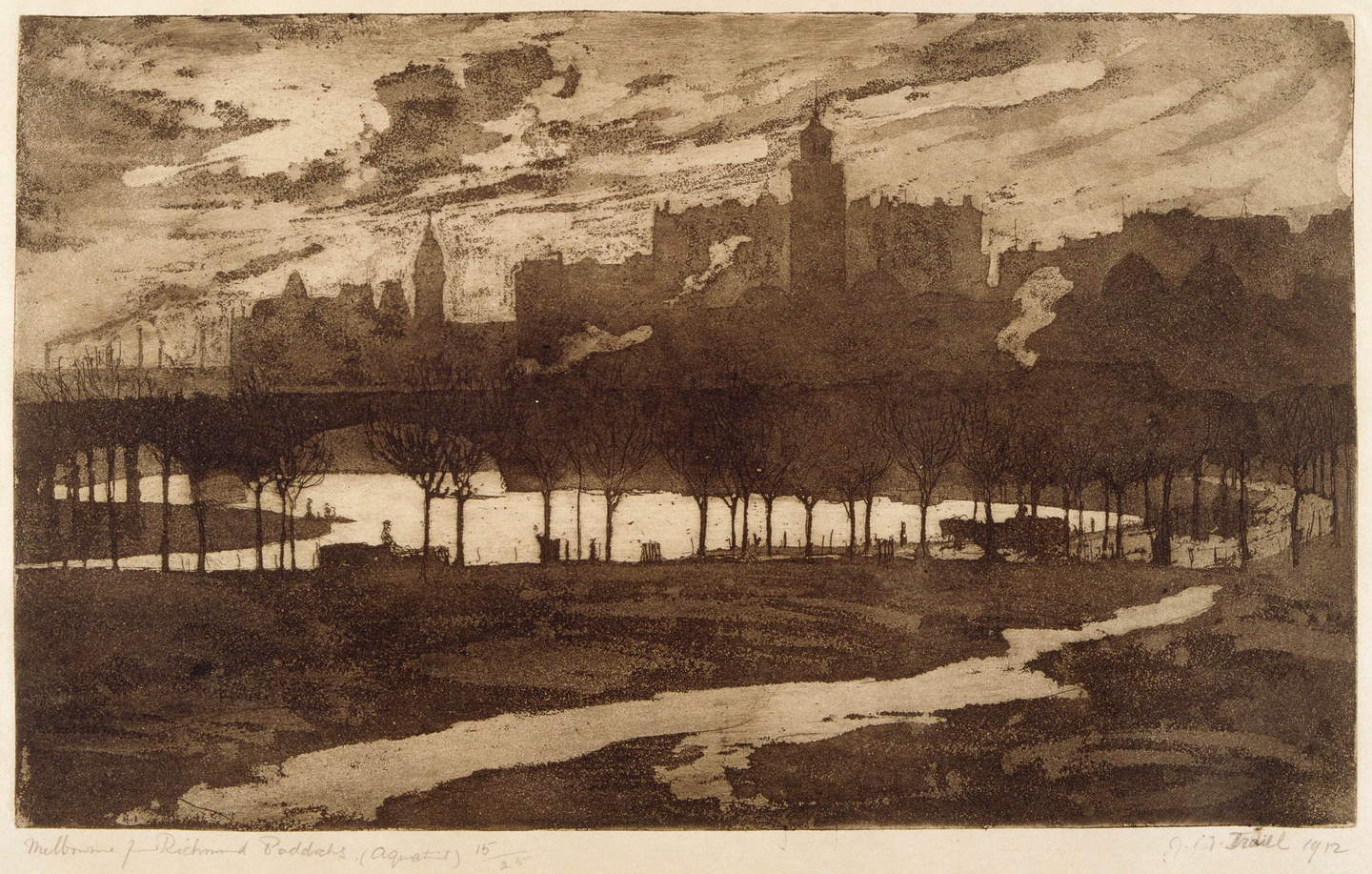 As a nurse during WWI 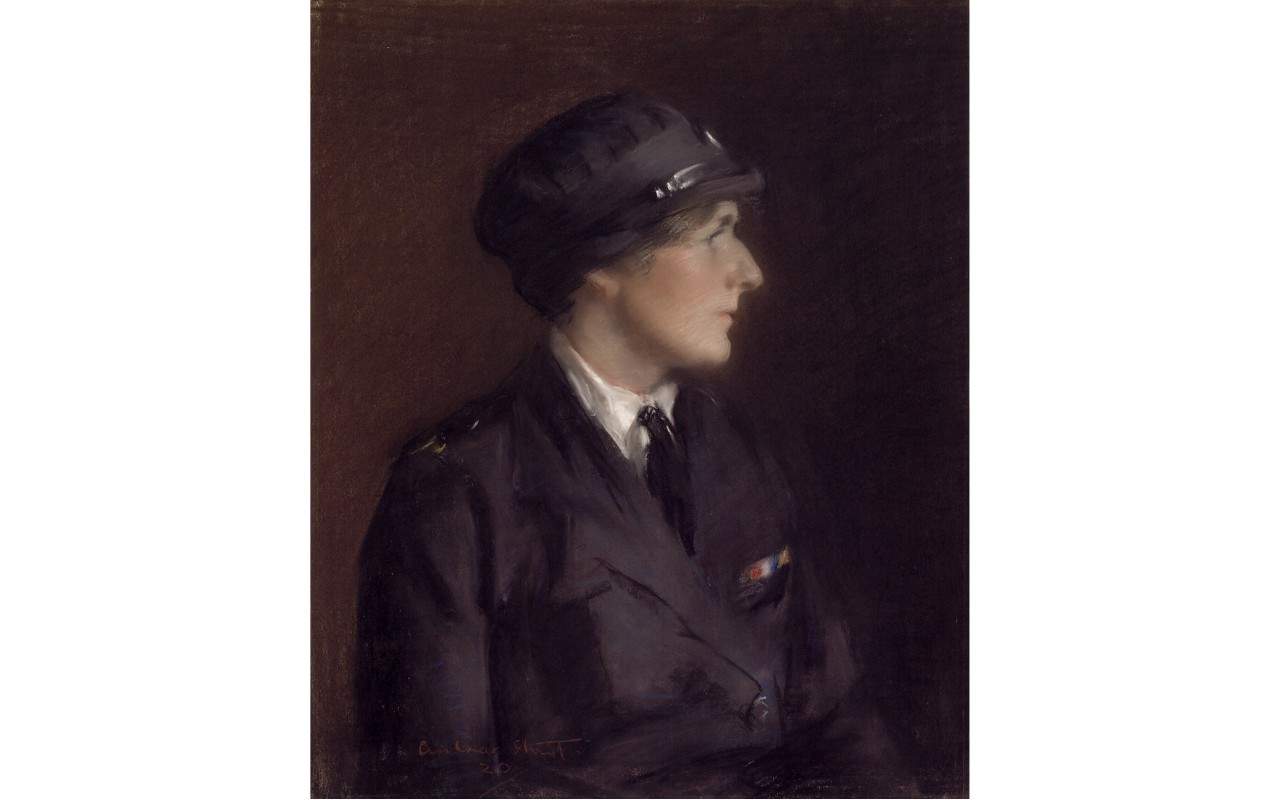 At the outbreak of the first World War, Jessie was determined to provide assistance and in 1915 she travelled to England to join the British Red Cross. Jessie worked for three and a half years as a VAD nurse in the military hospital at Bois-Guillaume near Rouen, France. The above portrait, by fellow Her Own Path artist Janet Cumbrae Stewart, depicts Jessie in her WWI military uniform.

While she worked as a nurse, Traill abandoned her art practice, however recorded her experiences through letters, diaries and photographs. 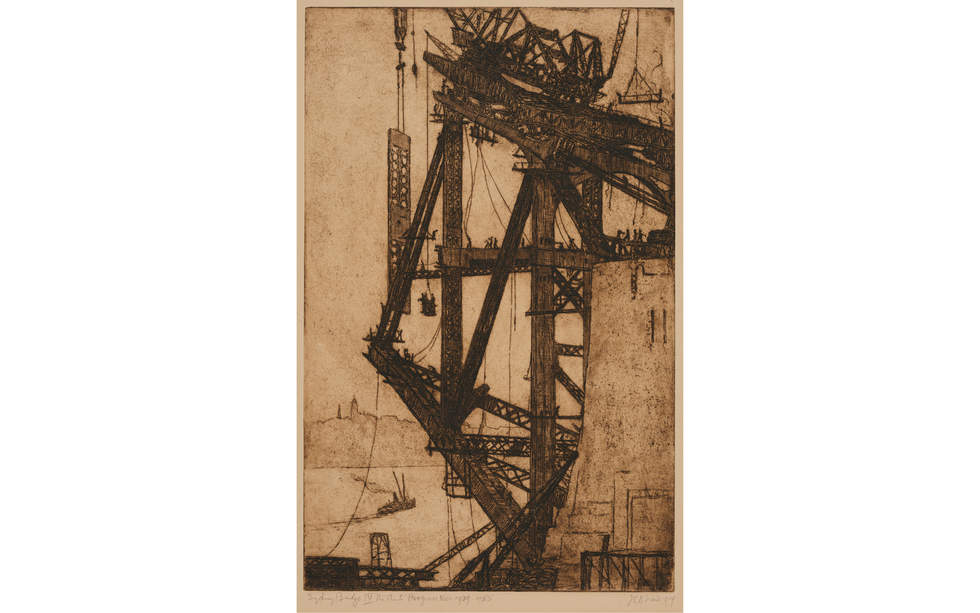 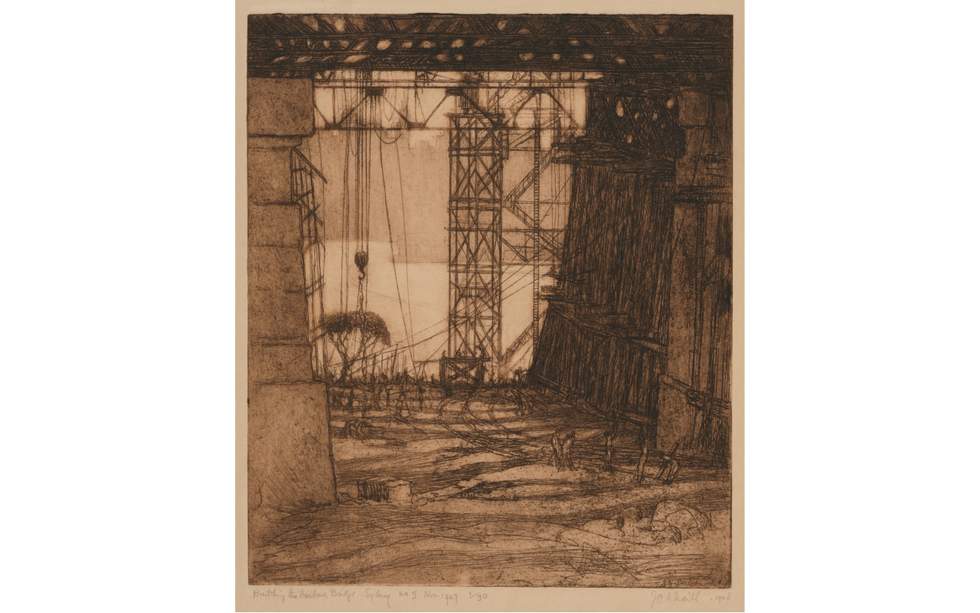 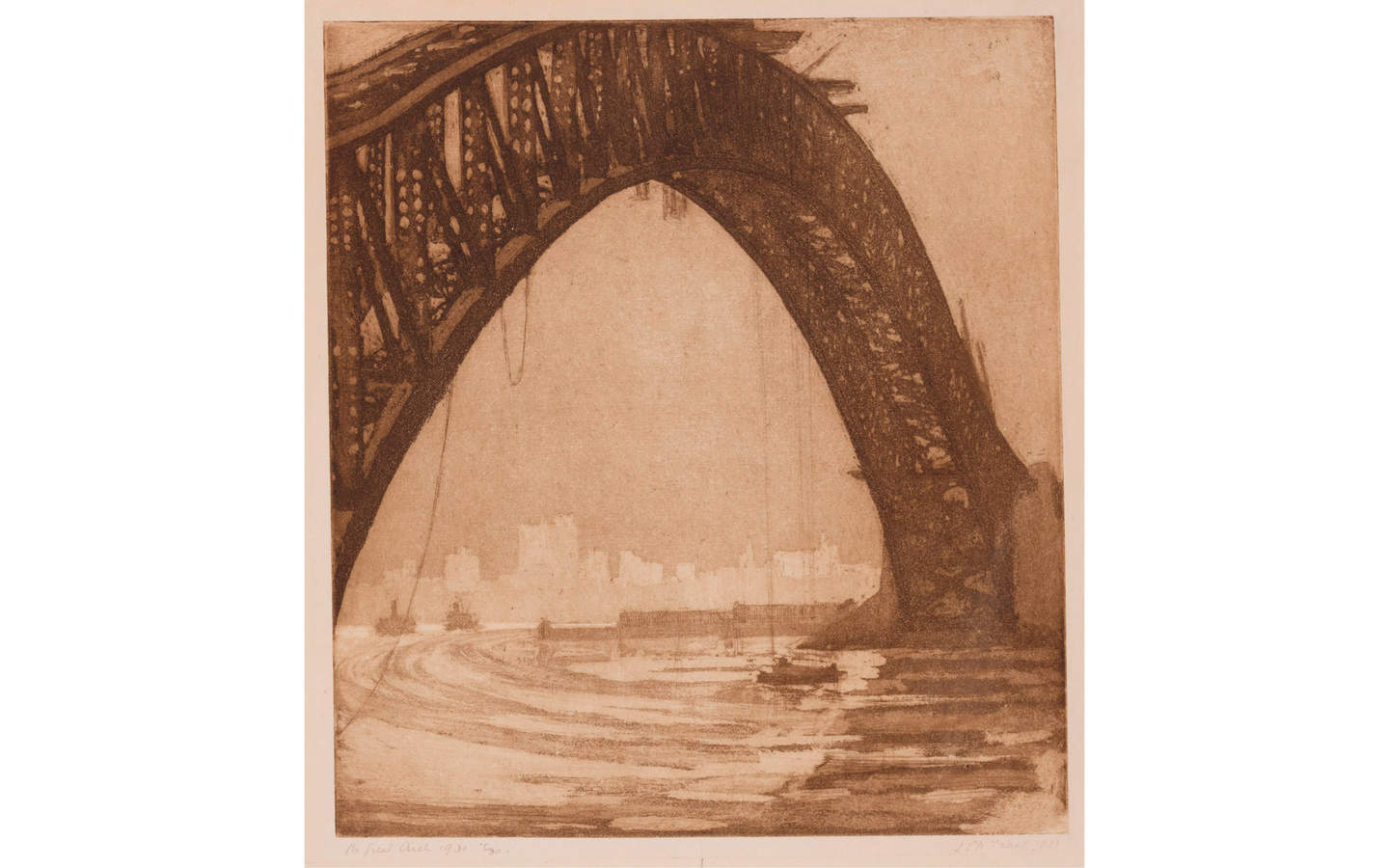 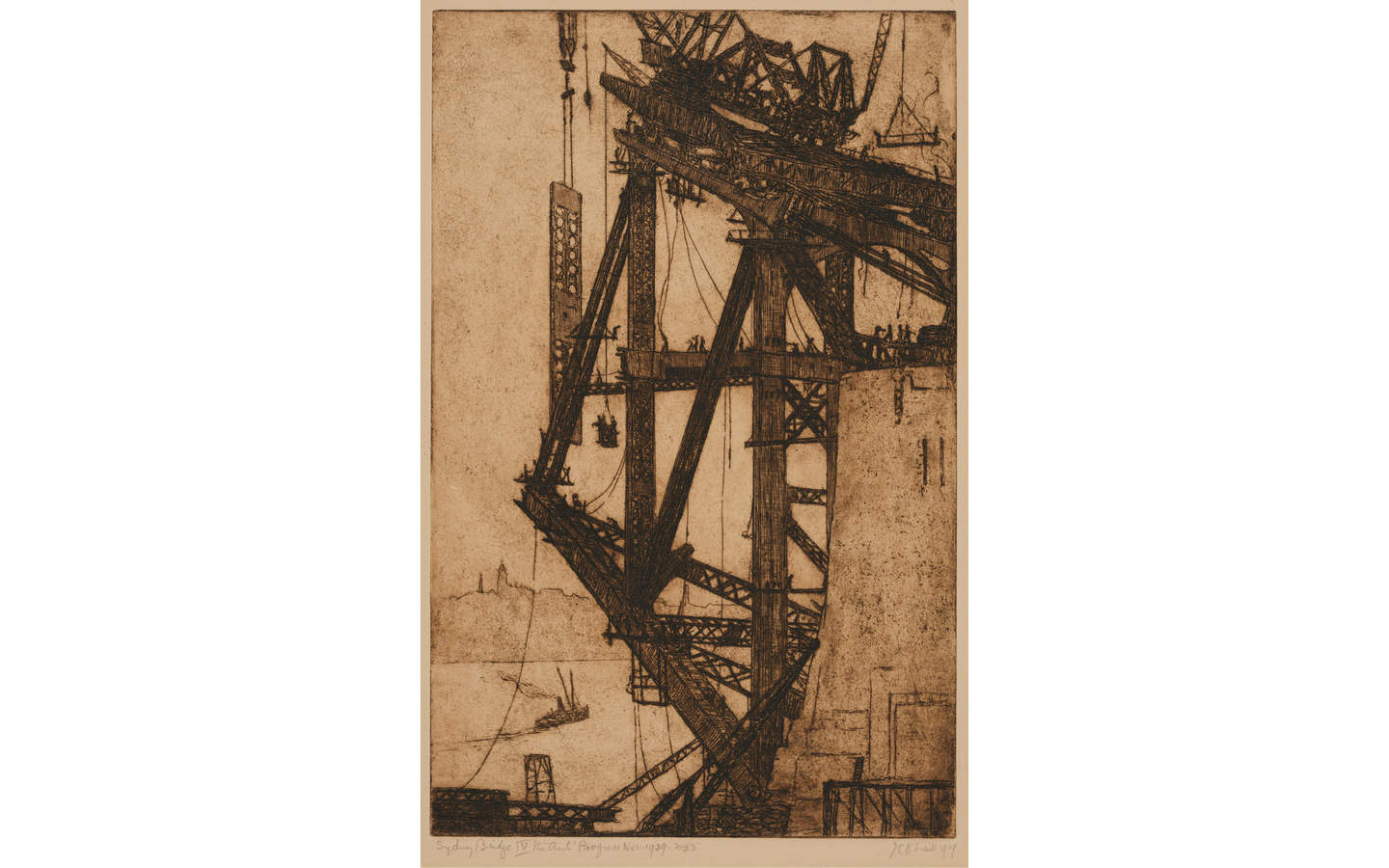 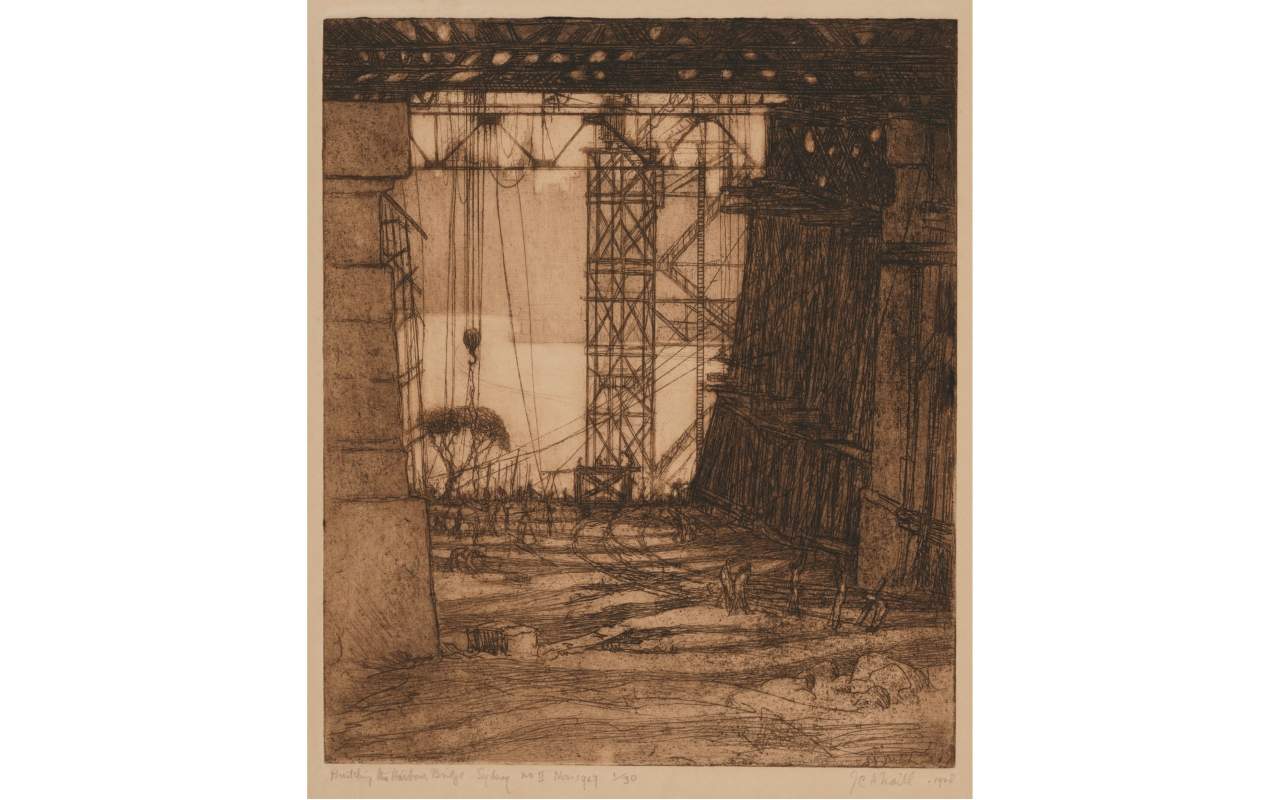 Upon returning home in 1920, Australia was experiencing a period or post-war nationalism and optimism and Traill turned her focus to scenes of urban and industrial progress. Between 1927 and 1932 Traill made regular trips to Sydney to document the build of the Sydney Harbour Bridge in drawings and watercolours which became the basis for her most recognised series of prints.

Displayed above are three out of nine works from Traill’s iconic Building the Harbour Bridge series. In Building the Harbour Bridge II, the works north side (1927) Traill depicts the early stage of the bridge’s development, exploiting the graphic effect of the scaffolding which has a lace-like quality coupled with industrial strength.[2] In Building the Harbour Bridge IV: the ants' progress (1929), the bridge is ascending over the harbour where the workers are shown from such distance that they appear ant-like and dwarfed by the scaffolding and pylons. In The great arch (1932), where the build is nearing an end, there is a calm atmospheric quality that differs from the earlier, more frenetic, etchings.

Jessie Traill was an intrepid traveller who continued to visit Europe regularly throughout her life recording the world around her. Her last trip to England was in 1965, two years before she died at the age of 86. Traill also explored her home country on numerous trips and in 1928 she travelled to Central Australia by train and truck, visiting Flinders Ranges, McDonnell Ranges and Alice Springs. She painted the local landscape and held an exhibition in an old schoolhouse in Alice Springs. Predating artist Rex Battarbee’s now famous engagement with Central Australia, Jessie Traill was the first white person to paint this region and exhibit there - another of her trailblazing achievements.[3]

Throughout her life, Jessie showed a humanitarian spirit, often donating her time, money and artworks to various causes. For example, in 1933 she returned to Central Australia, visiting the Hermannsburg Mission with Una Teague and, on their return to Melbourne, helped raise money to build a pipeline to provide water to the mission.

In addition to being one of the most important printmakers in Australia in the 20th century, Jessie Traill helped popularise the medium. By the 1930s, she was in her 50s, and the physical process of printmaking was getting difficult so she focused her practice on watercolours. She continued to keep the medium alive by helping mentor the next generation of artists in printmaking. Arthur Boyd, Fred Williams and Franz Kempf are just three of many artists she taught etching to and throughout the 1940s she let Boyd use her etching studio. In addition, she often lent her Harkaway studio to groups of young women to paint en plein air.[4] 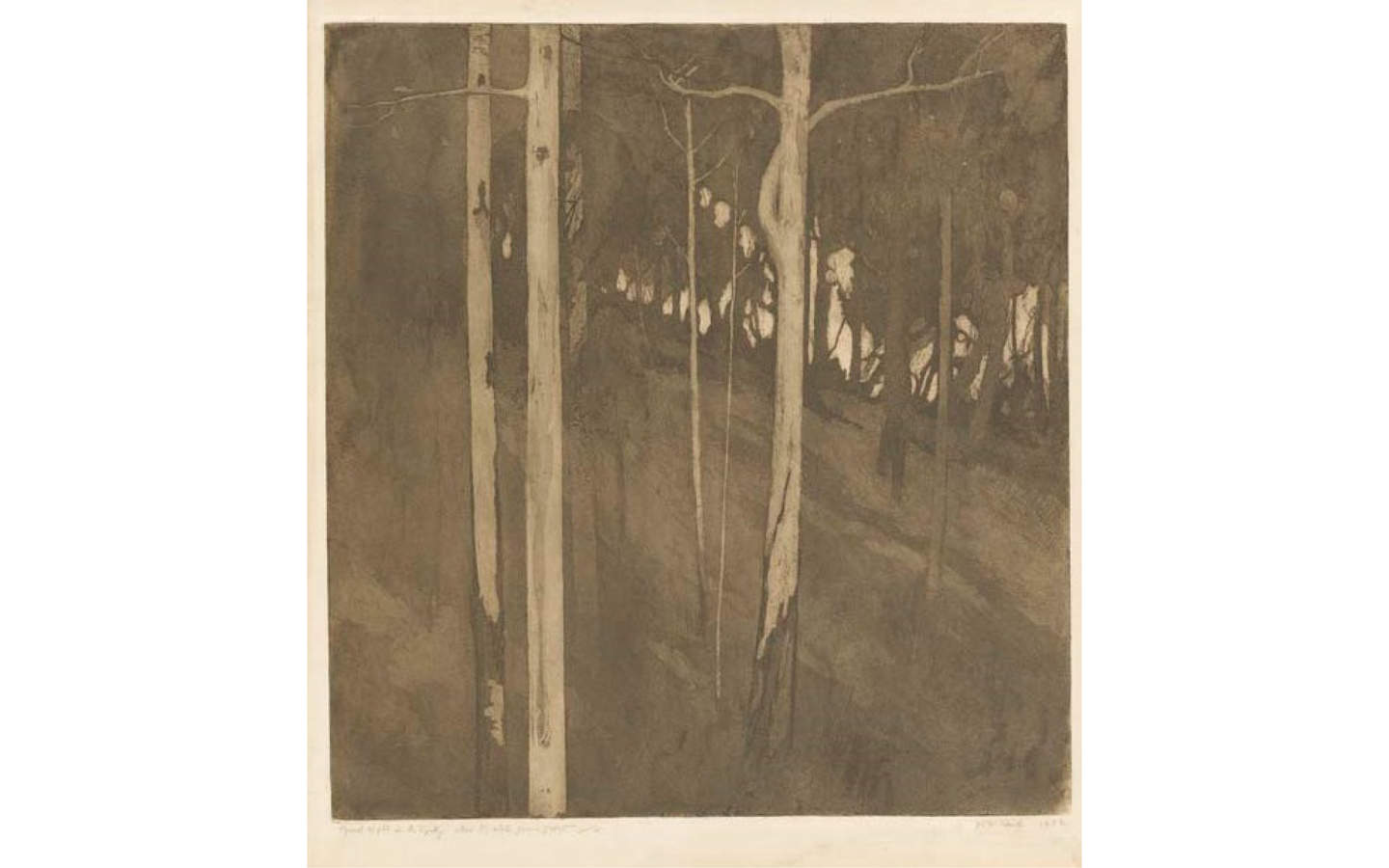 Jessie Traill, Goodnight in the gully where the white gums grow 1922, etching and acquatint. Courtesy the author © Estate of the artist. Licensed by Copyright Agency.