Spotlight on the Collection: Gerry Wedd

Adelaide artist Gerry Wedd is known for his blue and white hand-built ceramic vessels adorned with detailed vignettes and imbued with humour and witty commentary. Wedd originally studied jewellery making before he formally trained in ceramics, and from the 1980s until 2006 he worked for Australian beach culture label Mambo where his designs featured on surfboards, clothing, ceramics and posters. 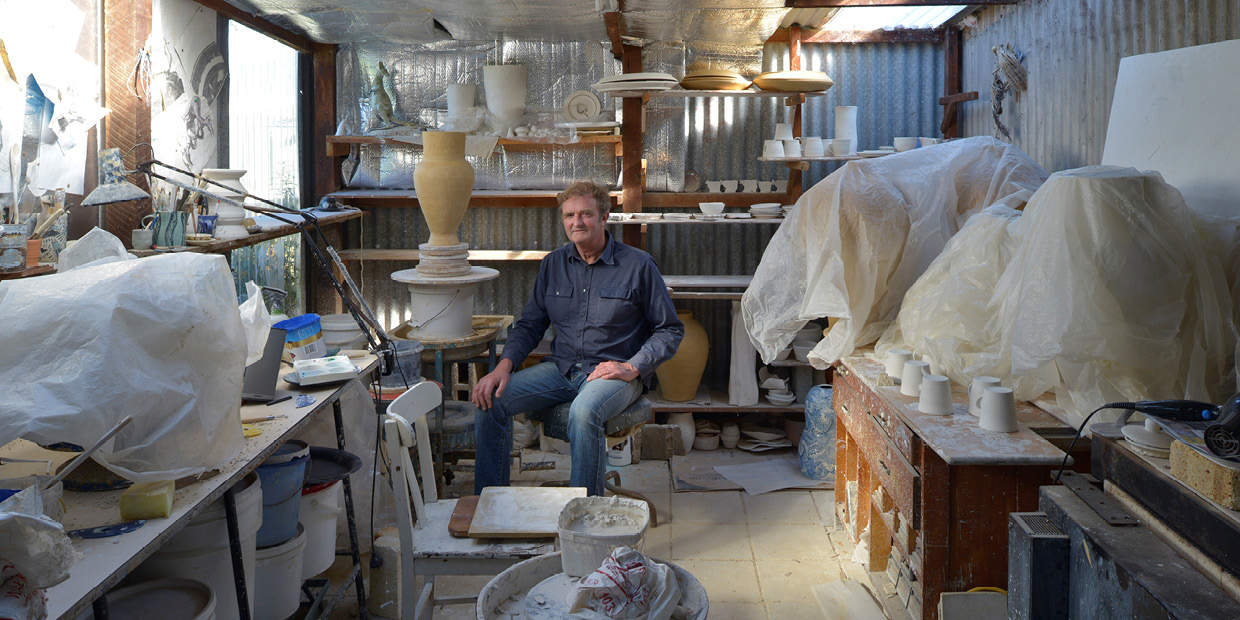 Wedd has been a recreational and competitive surfer for over 40 years and his art practice often refers to this personal interest in sea and surf culture. While some of his functional ceramic forms are decorated with surf imagery such as waves, boards, frangipani flowers and rubber thongs, other pieces celebrate the achievements of surf photographers, board makers and Australia’s surfing champions such as Bernard 'Midget' Farrelly, Nat Young and Peter Drouyn. Rather than simply celebrating famed sporting heroes, Wedd’s work scrutinises the construction of contemporary sporting mythologies. His interest lies in individuals he considers as anti-heroes of surfing – those talented surfers who are not represented in the annuals of surfing history as they saw surfing as a way of life, not as a competitive profession.

Gerry Wedd has won a number of art awards including the Sidney Myer Fund International Ceramic Award in 1998 and the Hobart Art Prize in 2010. In 1990, he along with other ceramicists, established the Jamboree Workshop in Adelaide. He is represented in public collections around the country including the National Gallery of Victoria, Melbourne; Art Gallery of South Australia, Adelaide; National Gallery of Australia, Canberra and the Powerhouse Museum, Sydney. 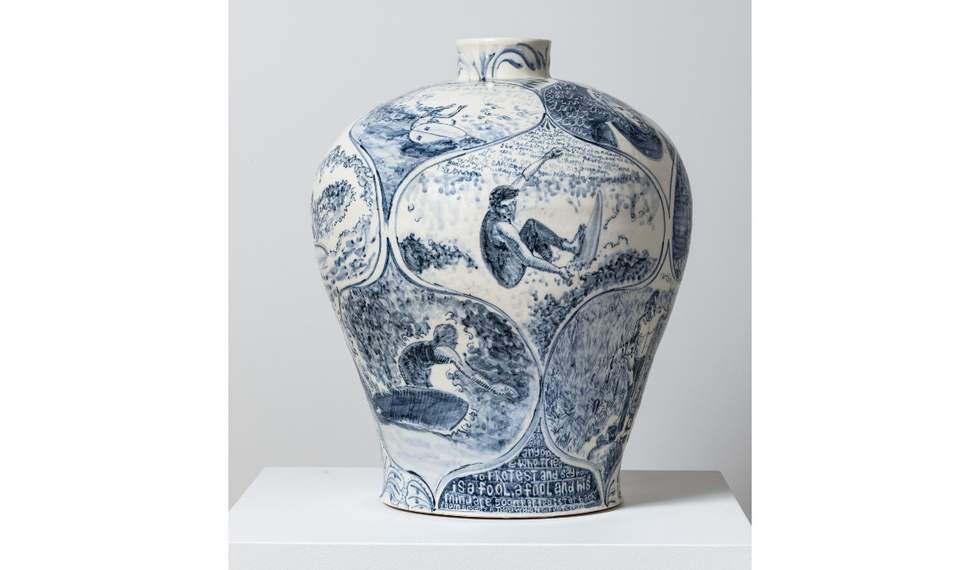 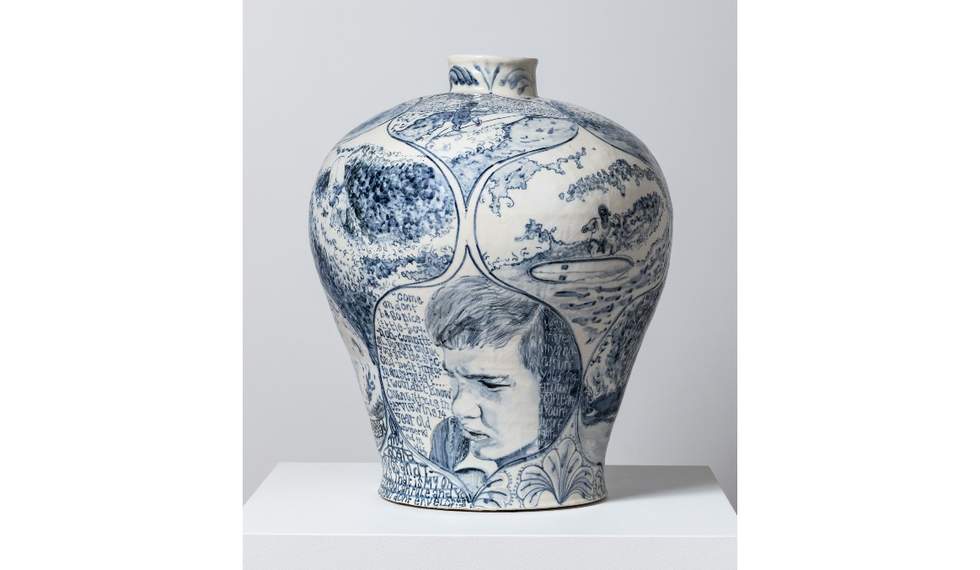 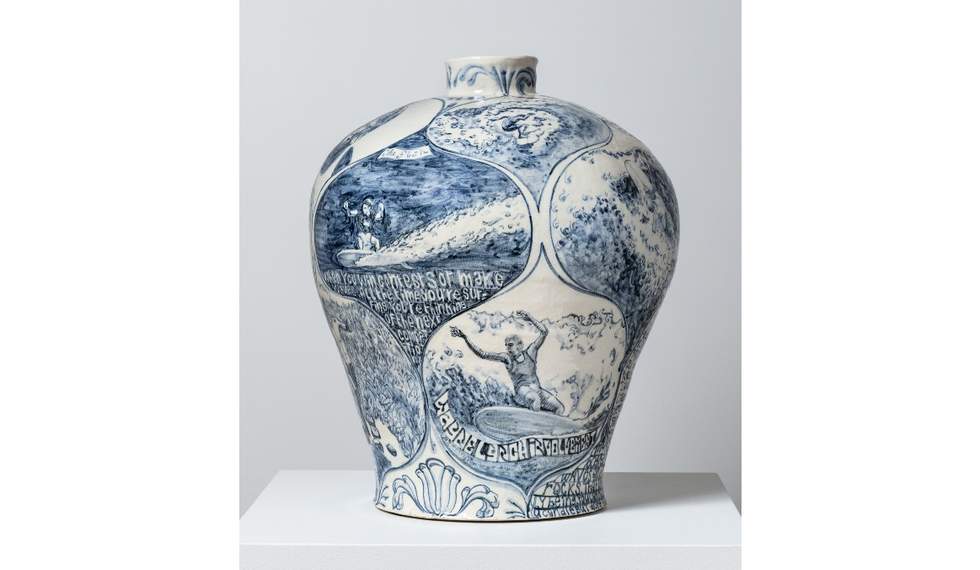 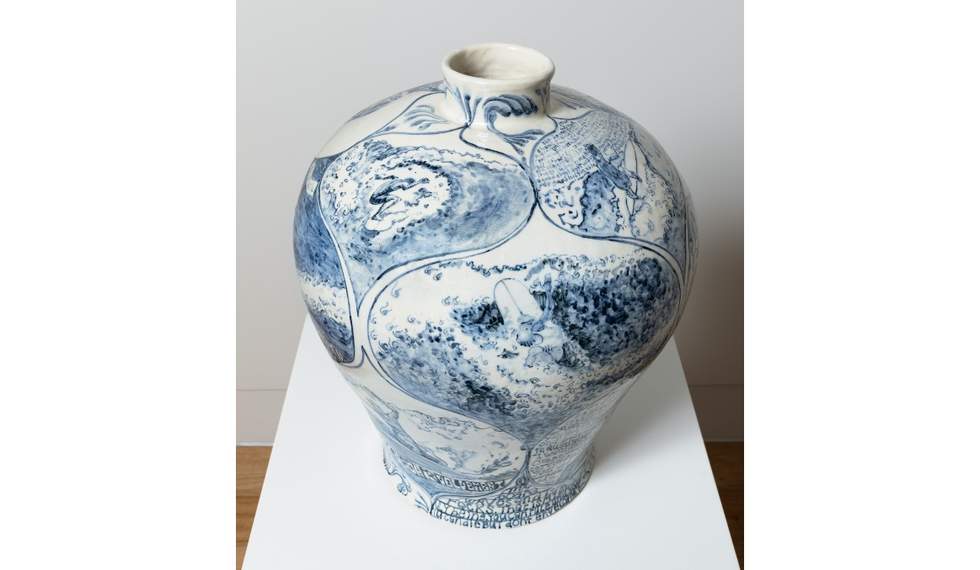 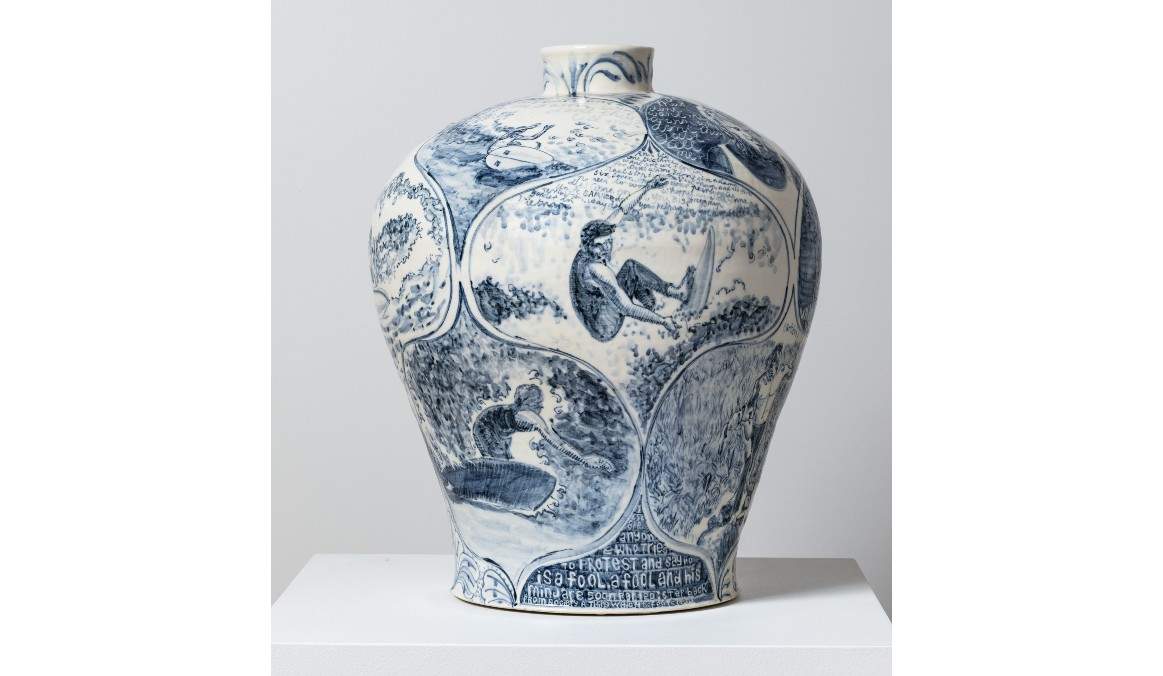 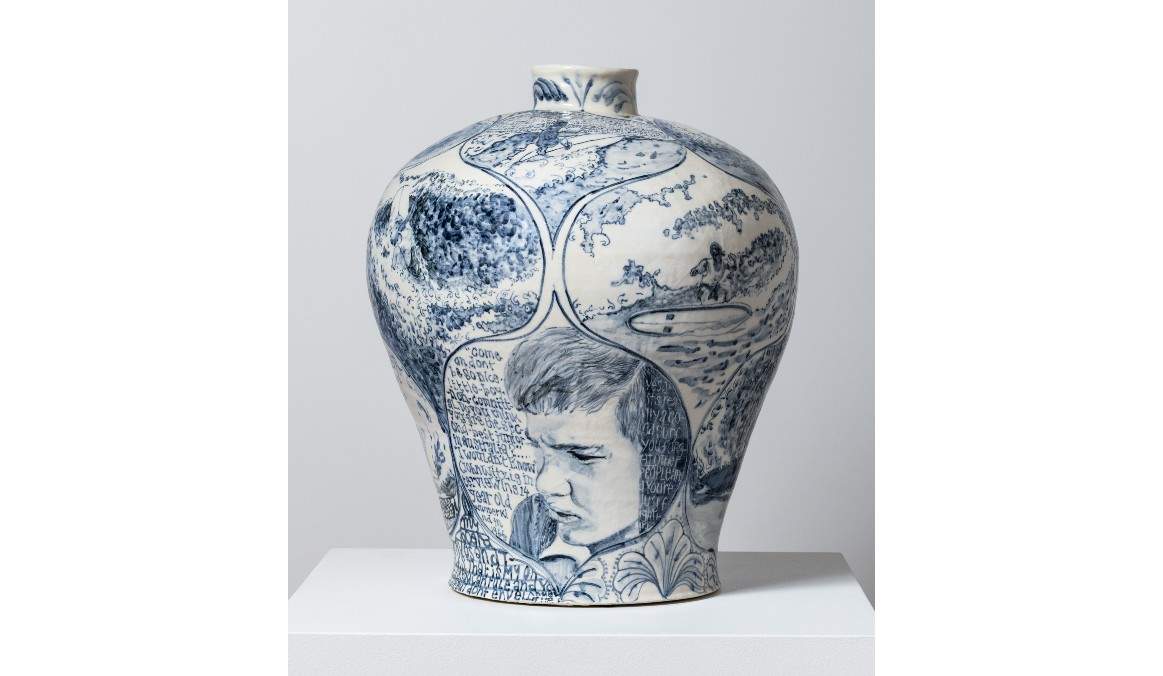 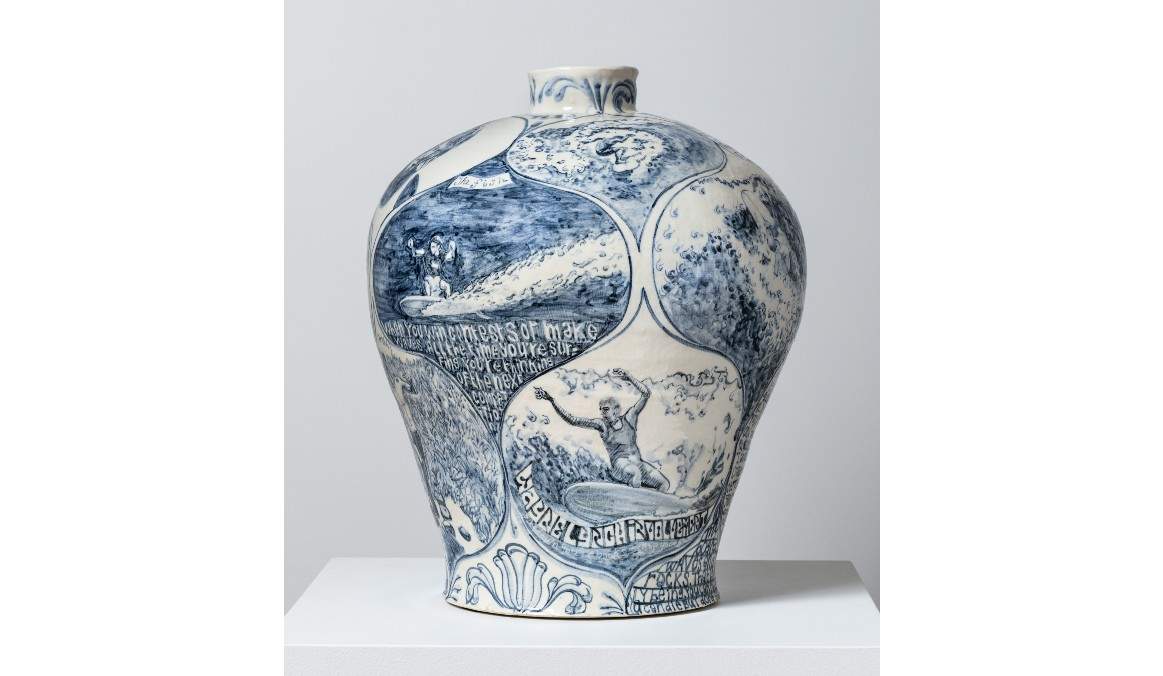 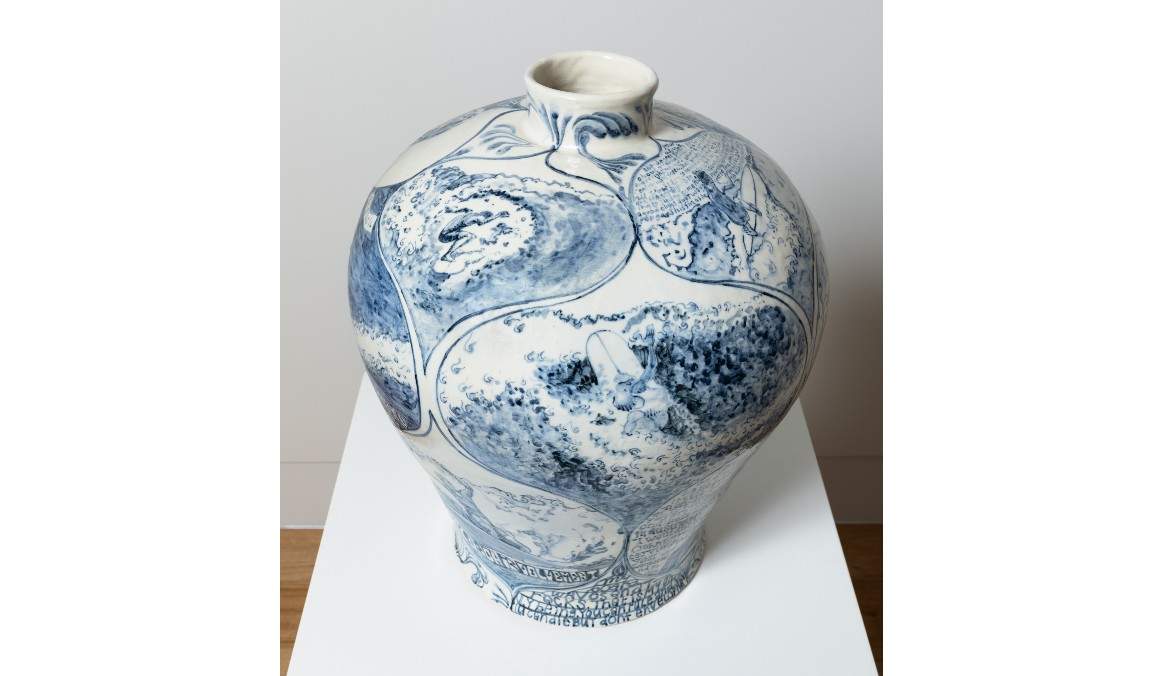 For Wayne Lynch pot (2015), Wedd has used his signature cobalt blue underglaze (which references Willow Ware – a form of pottery which had its origins in early Chinese ceramics before being appropriated by European potteries in the 18th century for mass production) to pay homage to Australian surfing legend Wayne Lynch. The surface of this large vessel has been decorated with a series of vignettes which feature iconic imagery of the surfer as well as a number of quotes from Lynch which gives further insights into his surfing exploits.

Born in Victoria in 1952, Wayne Lynch was regarded as a child prodigy, winning competitions from his early teens, and is remembered for helping to revolutionise the sport in the late 1960s and 70s. Despite winning a number of surfing competitions and being featured in surf films, Lynch shied away media attention, eschewing competition in favour of surfing at isolated breaks.