Her Own Path: Norah Gurdon

Norah Gurdon was one of the first generation of professional artists who graduated from the National Gallery Art School in the early 20th century. Known for her impressionist landscape paintings, where she captured the fleeting effects of nature, her work is synonymous with the Dandenongs which she recorded repeatedly after moving there in the early 1920s. 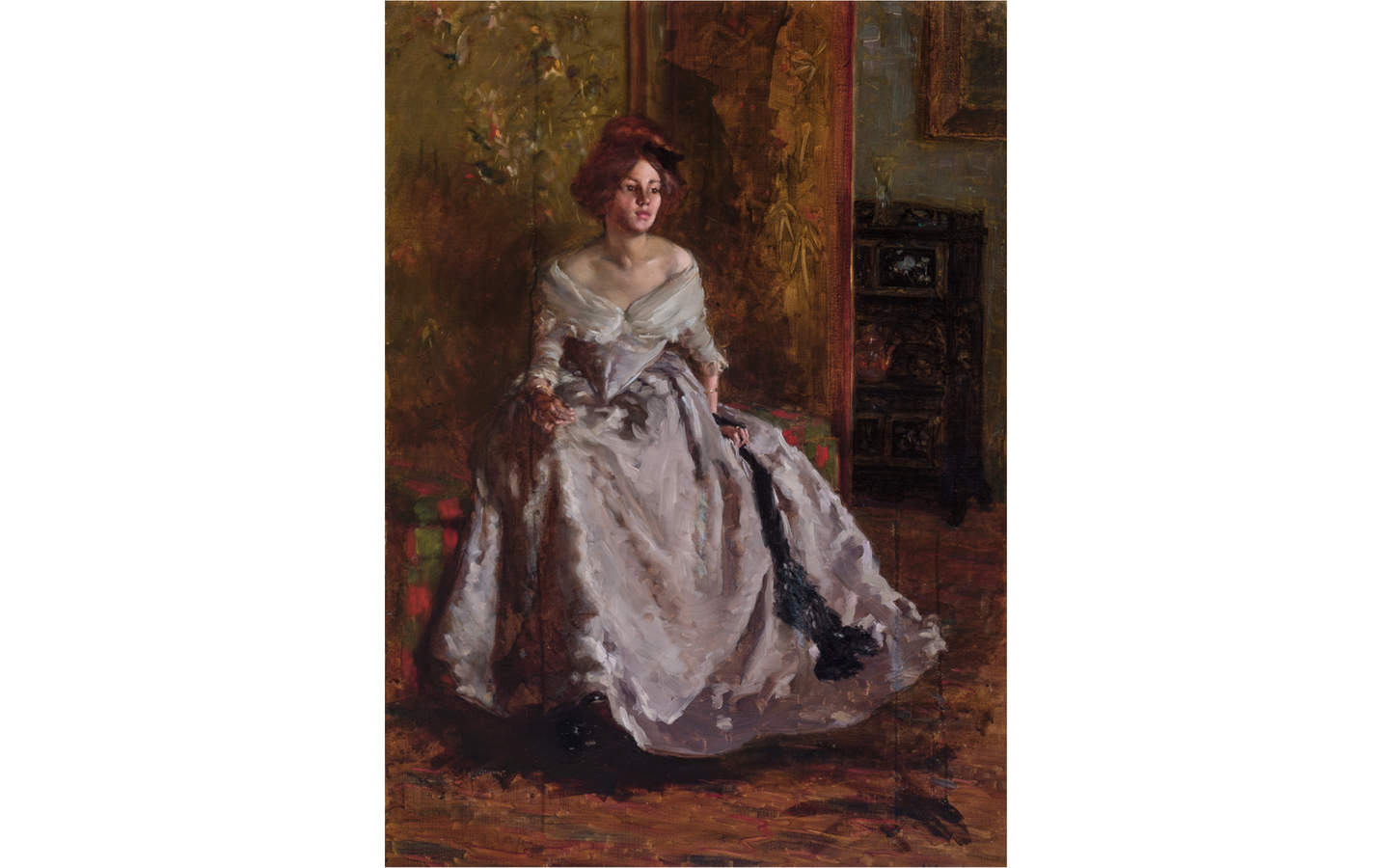 Norah Gurdon (1882-1974) was born in 1882 in Norfolk, England to Edwin John Gurdon, a doctor, and Ellen Ann Randall, and was the second of four surviving children. The family migrated to Victoria in 1886, living in Ballarat initially before settling in Brighton where her father had a doctor’s surgery at their home, first at ‘York Villa’ on New Street and then at ‘Elmhurst’ on Church Street.

Elmhurst was a well-appointed brick villa residence on a large property with frontages to Church, Halifax and Wells Streets in Brighton. The property was over two acres and in addition to laid out flower, kitchen and fruit gardens, also included a tennis court, stable and coach house. The property was sold in 1898 and subsequently subdivided in the 1930s and the house itself was demolished in the 1960s. 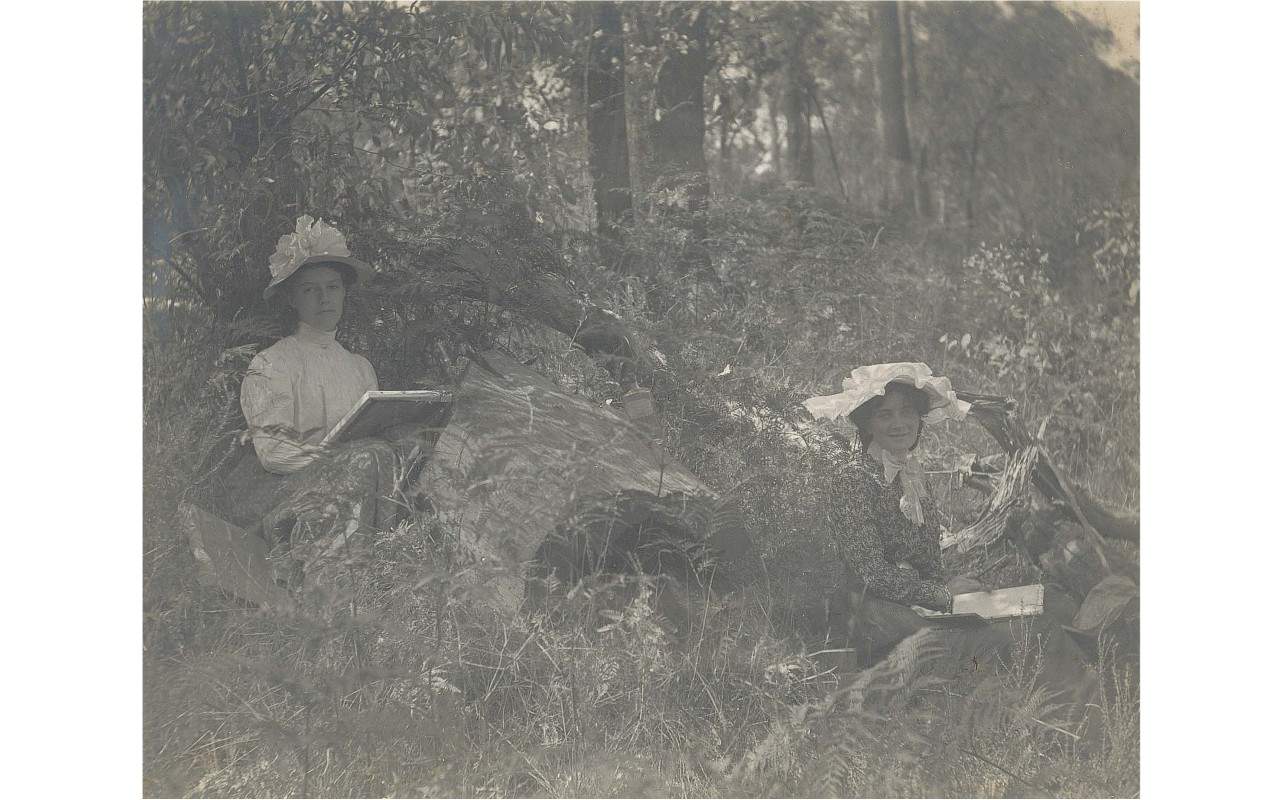 During her time at the Gallery School she became close with fellow artists Jessie Traill, Janet Cumbrae Stewart, Vida Lahey and Dora Wilson, who were to become life-long friends. In the photograph above, Norah Gurdon (left) and Janet Cumbrae Stewart (right) are pictured painting outside during their student days. In a second photograph below, possibly in the Dandenongs, Norah (left) is on another outdoor painting excursion with fellow National Gallery School students including Constance Jenkins (second from left) and Jessie Traill (seated far right). 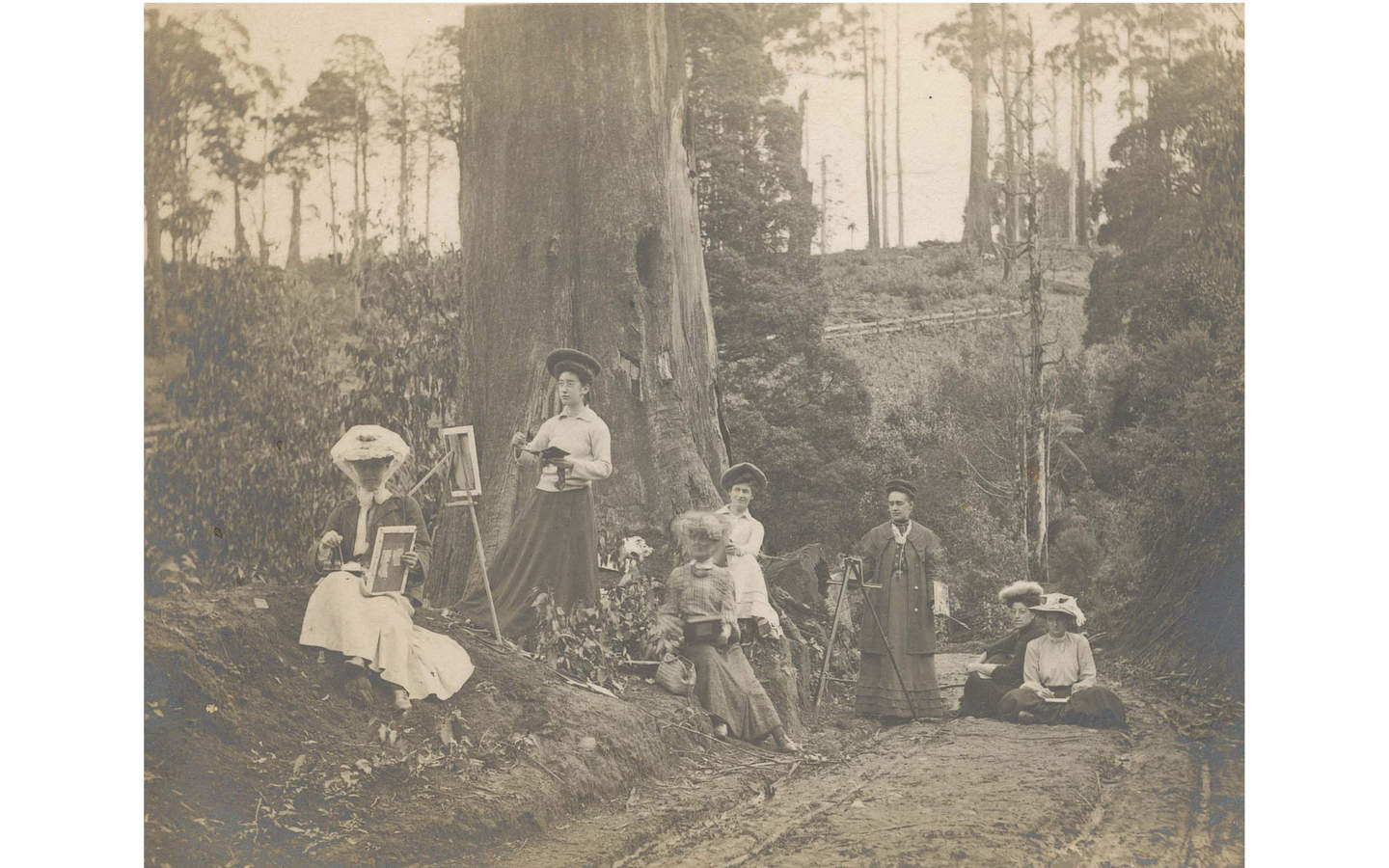 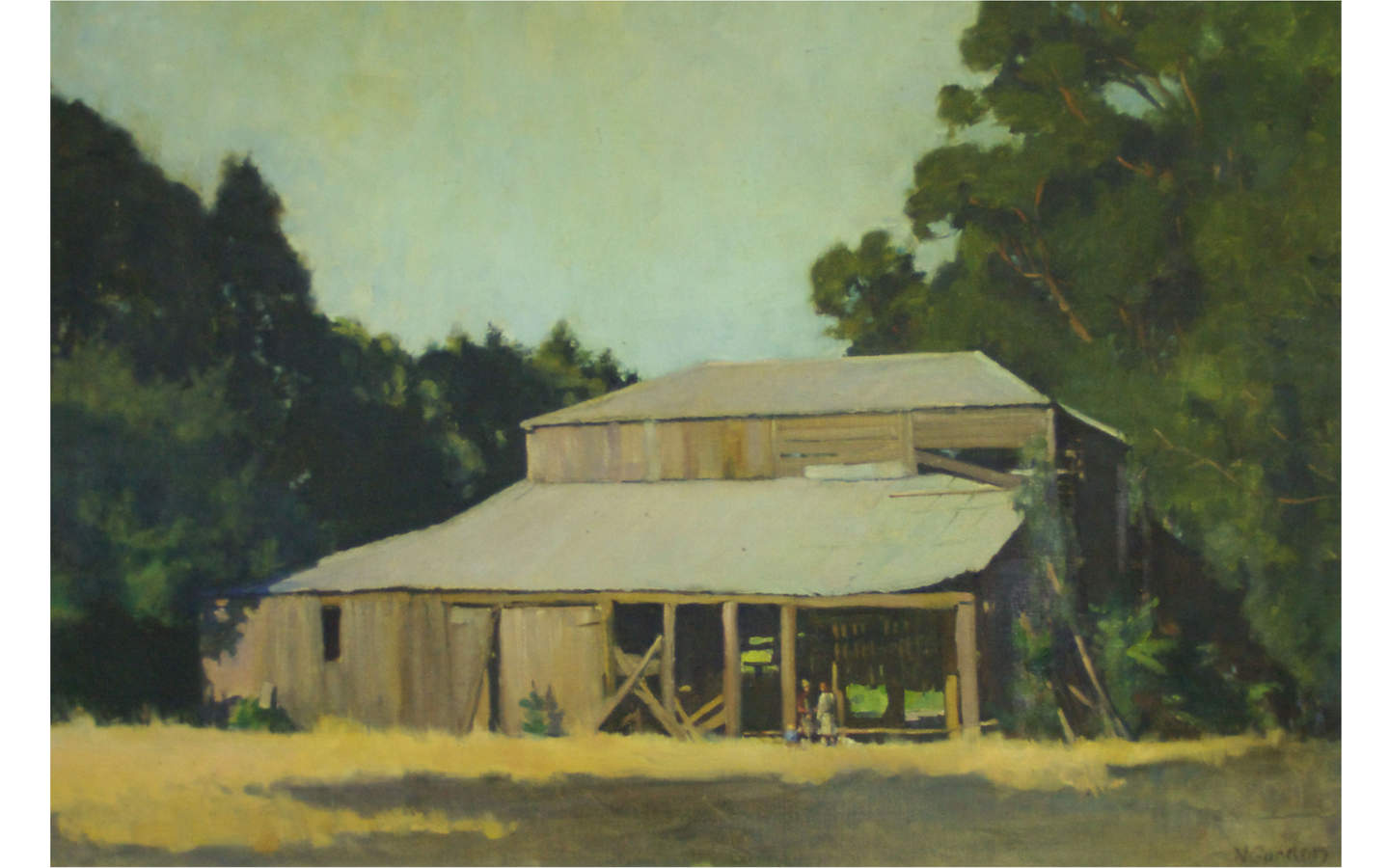 While still a student, Gurdon began exhibiting with the Victorian Artist Society from 1907 and later became a member of the Australian Art Association and Melbourne Society of Women Painters, with whom she exhibited from 1923-1954.

In 1909 Gurdon entered the City of Prahran’s Art Exhibition Prize and won the major category for oils for her painting of a reclining convalesced child titled Tottie. Winning this competition was a great achievement for Gurdon, especially so early in her career. Not only did she win against over 180 other entries, but the exhibition was viewed by thousands and the winning work was acquired by the Prahran Council.

By 1910 Norah rented a studio at Temple Court in Collins Street in Melbourne where fellow Her Own Path artists Jessie Traill and Janet Cumbrae Stewart also had studios. Three years later their paths continue to be linked when they joined a group of National Gallery Art School alumni to form ‘Twelve Melbourne Painters’. The artists of varying style also included Ruth Sutherland, May Roxburgh, Dora Wilson, Charles Wheeler, Penleigh Boyd, Percy Leason, H.B Harrison, Frank Crozier and Louis McCubbin and they began an annual exhibition which was put to an end in its second year by World War I.[3]

In 1914, Norah Gurdon travelled to England to pursue further studies in art, but this plan didn’t eventuate due to the outbreak of war three weeks after her arrival and Norah, like her friend Jessie Traill, joined the VAD in France. Based in Le Croisic in Brittany, Norah was a VAD nurse for three and a half years but she continued to paint regularly during her off-duty hours.

Norah Gurdon was to stay in Europe and the United Kingdom after armistice until 1920, painting through her travels from Brittany across to Scotland, Suffolk and Cornwall. A Suffolk Mill, shown above, is an example of the small rapid studies in landscape painted during this time.

A collection of 162 of these works painted while abroad were shown in a solo exhibition at the Athenaeum Gallery upon her return in 1920 and then in Brisbane in 1921 and generally received positive reviews. While acknowledging that her output isn’t technically important, artist and critic Alexander Colquhoun praised Gurdon for handling her landscape with "much freedom and dexterity and a fine cognisance of space and colour" and for showing evidence in "ready facility in treating passing efforts of nature, and a feeling for composition, which declares itself in the frequent and well-considered introductions of figures and incidents into the pictures".[4]

As with Jessie Traill, Norah Gurdon was financially independent and unmarried and made further trips to Europe in 1927 and 1937.

Move to the Dandenongs 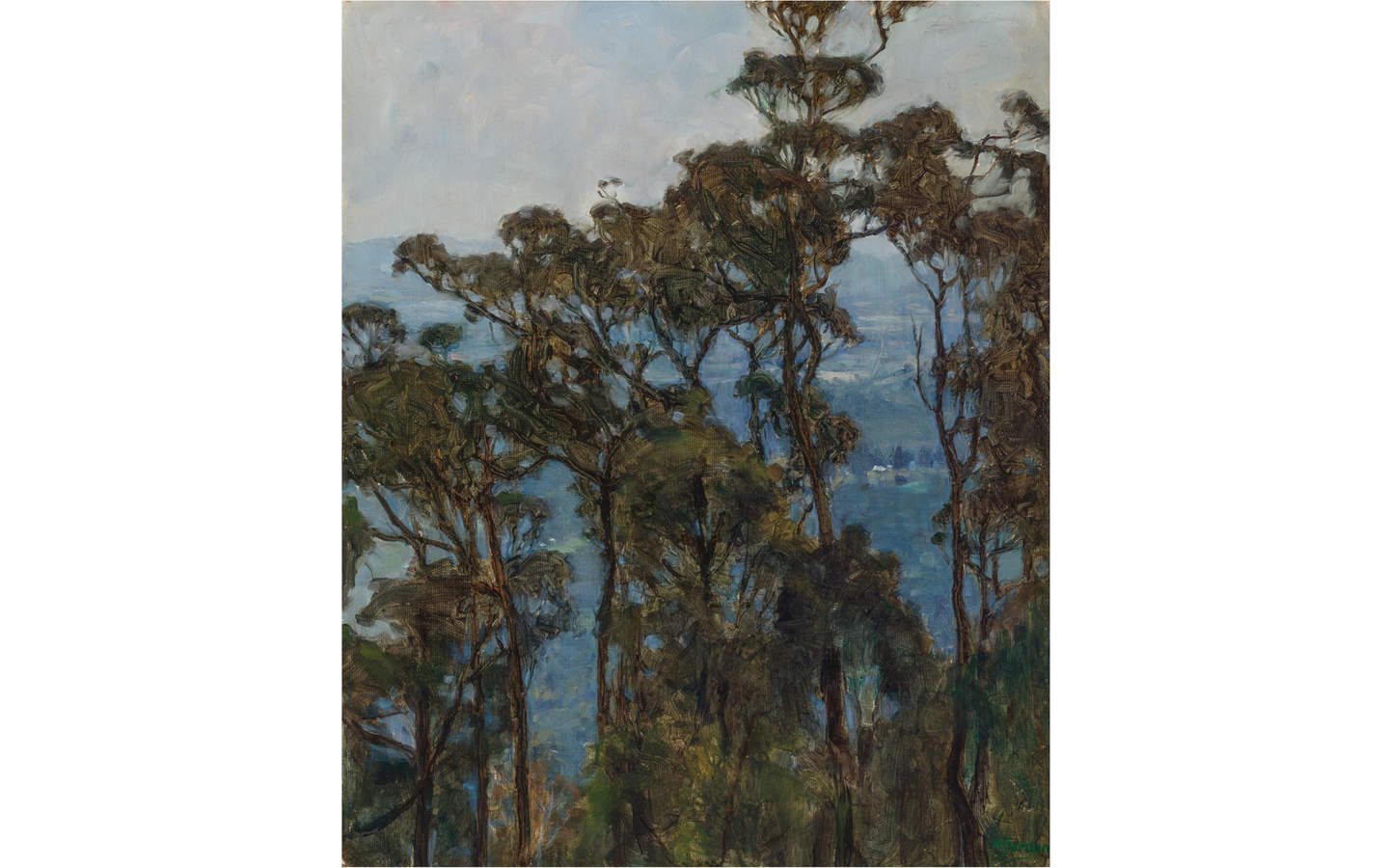 In 1922, Norah purchased land in Kalorama and built a house which she shared with her sister Winifred. It would have been extremely rare for a single woman to do this at the time, particularly in such a rugged mountain location.

Norah's album, viewable at the link below, which dates from 1922 to 1936, records the building of her dream house, from the first visit to the site and clearing of the land, to moving in day and planting the first bulbs in the garden. It also documents various friends who visited, with their photographs and signatures scattered throughout the album. On one page we see Jessie Traill helping Norah select paint colours and on another Jessie and her sister Margaret are helping install a sundial in the garden. While neither Norah nor Winifred were to marry, the album shows a happy life they made for themselves in the Dandenongs, far from the lonely spinster reputation that usually befell unmarried women at the time. There are regular picnics in the beautiful gardens the Gurdon sisters established, beloved pet dogs and wildlife are recorded and many friends with young children who visited the property feature throughout.

Regular visitors included her former teacher from The National Gallery Art School, Bernard Hall, as well as a number of fellow artists such as Pegg Clarke, Vida Lahey, Dora Wilson, Yvonne Cohen, Blamire Young, Elma Roach, Louis McCubbin, Dora Serle, Anne Montgomery, Violet Teague and Arthur Streeton. Norah was also generous in hosting outdoor painting days for members of the Melbourne Society of Women Painters and Sculptors. On one occasion Norah invited a group of 17 women from the society to spend the day painting, with a spread of lunch and afternoon tea provided for the artists to enjoy whenever they chose to come in from sketching.[5]

Norah’s house, which is situated on Grange Road in the Dandenong Ranges, still stands. However, it has had numerous additions over the years. 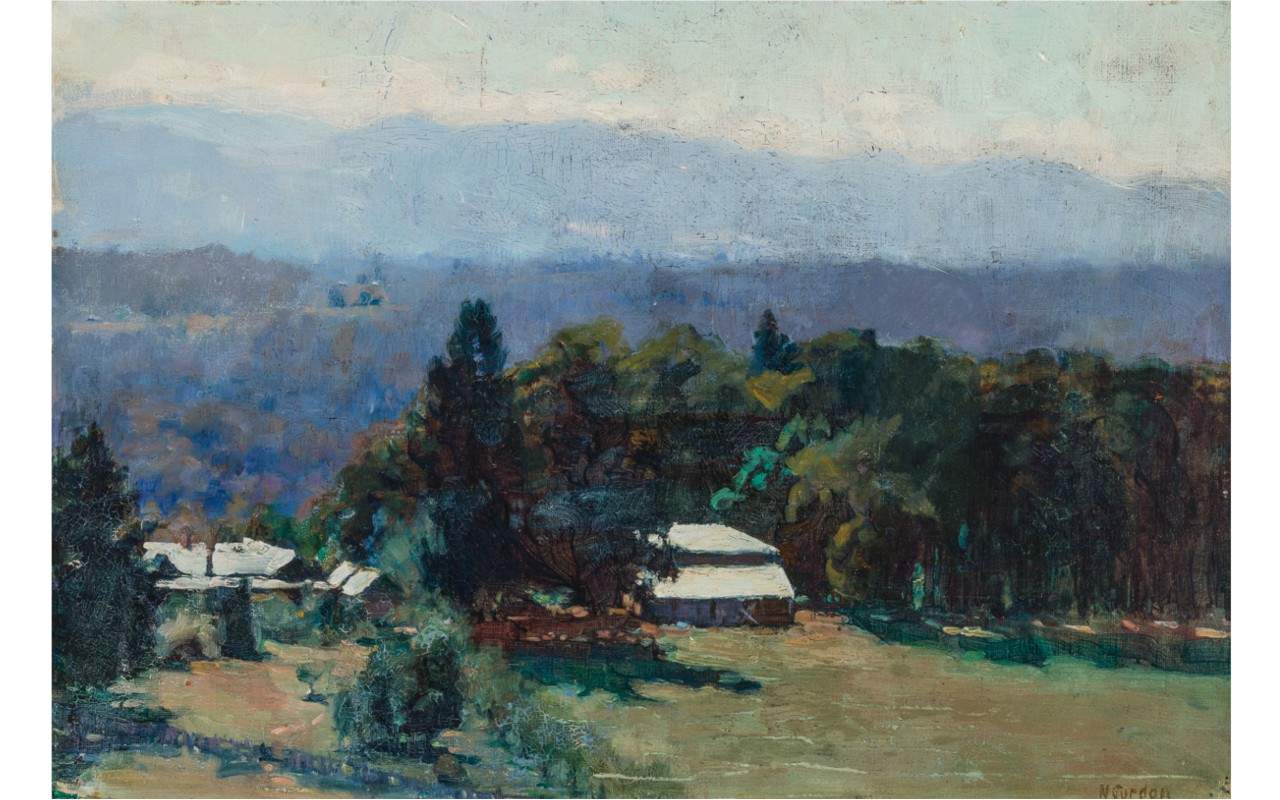 Gurdon is known for her plein-air impressionistic landscapes around her Kalorama home as seen in the painting Mount Dandenong above. These works are imbued with the blue and grey tones true to the distant ranges rather than the gold and blue palette made popular by the Heidelberg School artists. She was regularly commended on her ability to capture the fleeting effects of nature and her treatment of harmonious colour. Once she moved to the Dandenongs, she never tired of it. In an interview in 1937 she commented, "People say they prefer the sea because it is always changing. But nothing changes more than the hills here. Their colour alters with every hour of the day, and their character with it".[6]

In addition to painting, Norah Gurdon was also proficient in making textiles and took lessons in weaving in England during her 1927 trip abroad. In the 1920s and 30s she showed hand-woven rugs, wall hangings and woven bags at the Arts and Crafts Society exhibitions in Melbourne. 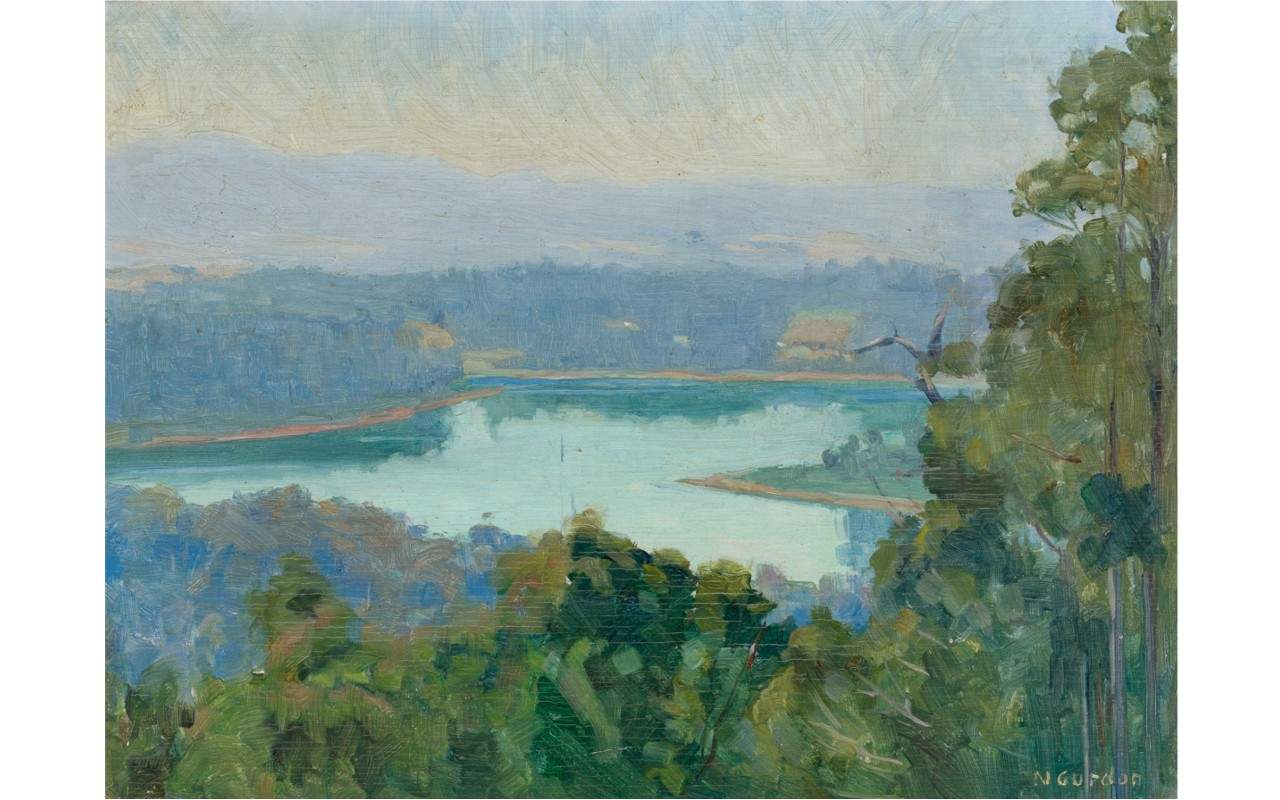 Like Janet Cumbrae Stewart and Jessie Traill, Norah Gurdon was extremely charitable to a number of causes. In 1937 she held an exhibition of 52 works where all the proceeds from sale were to be donated to the building fund of St. George's Intermediate Hospital in Kew, while in the 1940s she held a number of fundraising exhibitions in aid of the war efforts including the Red Cross Prisoners of War Fund, the Food for Britain Fund and the Church of England Diocesan Homes for Elderly People. In addition, she gave up her own painting during the World War II to become a Red Cross worker and spent long hours painting camouflaged nets.[7]

Norah Gurdon’s later years are rather elusive, with no records of exhibitions or mentions in the press. She lived to be 92, passing away on 27 June 1974 in Kalorama.

What can you tell us about Norah Gurdon?

If you have information to share about Norah's life or art practice please let us know.