Her Own Path: Clarice Beckett

Clarice Beckett’s quiet, lyrical paintings are synonymous with the Bayside suburb of Beaumaris, where she lived for sixteen years.

Unappreciated during her lifetime, Beckett’s contribution was overlooked for more than thirty years, and she has only in recent times been recognised as one of Australia’s most important modern landscape painters.

In recognition of her contribution to Bayside's history, the recent restructuring of the electoral wards included the southernmost section being named Beckett Ward. 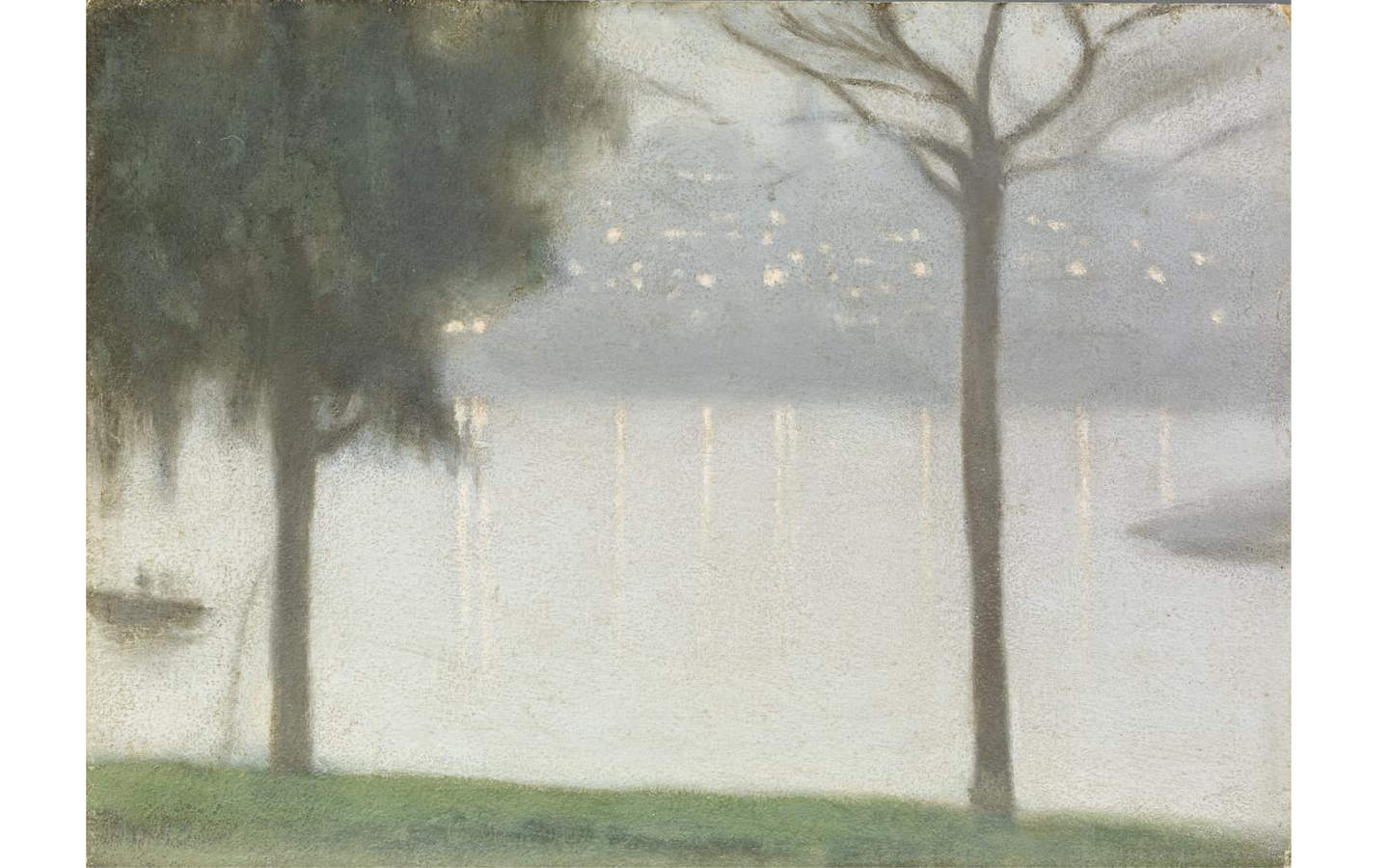 Clarice Marjoribanks Beckett (1887-1935) was born in Casterton, Victoria, on 21 March 1887 to Joseph Beckett, a banker, and Elizabeth Kate Brown. Her great grandfather was John ‘Como’ Brown, the wine and spirit merchant who owned Como House in Toorak and is credited for expanding the house and designing the gardens. She was the oldest of two girls and her interest in art was encouraged by her mother, herself a hobbyist painter.

She attended school locally at Casterton before boarding at Queens College in Ballarat where she studied charcoal drawing under Eva Hopkins. Following a move by the Becketts to South Yarra, she finished her senior education at Merton Hall. The family then moved to Bendigo where Clarice remained for eight years. 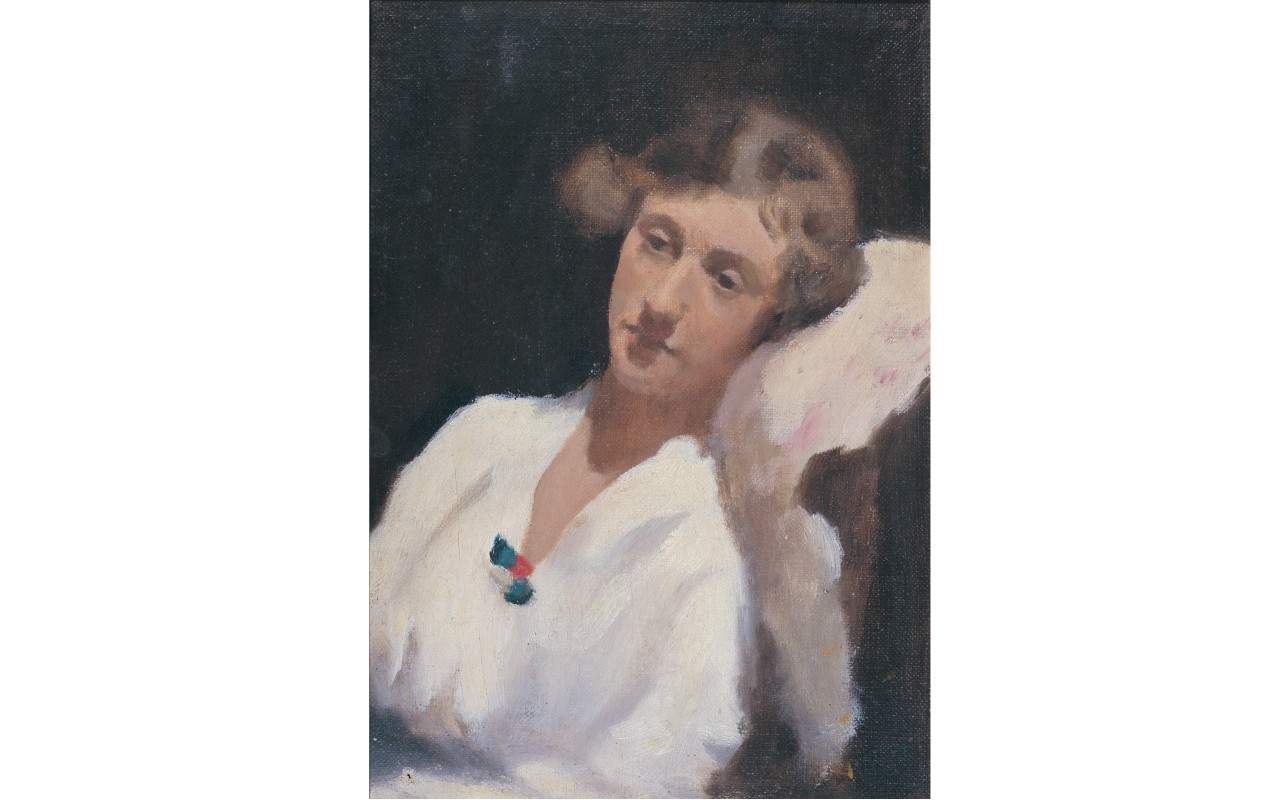 At 27, Clarice was a mature-aged student and was around 10 years older than her fellow students. She studied the three-year drawing class under popular painter and teacher Frederick McCubbin, opting for further studies with tonalist Max Meldrum at his newly opened school, rather than continuing a fourth year course in oil painting under the conservative director Bernard Hall.

Unlike many of her contemporaries, and the women of Her Own Path, Beckett never travelled overseas to study, in fact she never left the state of Victoria. 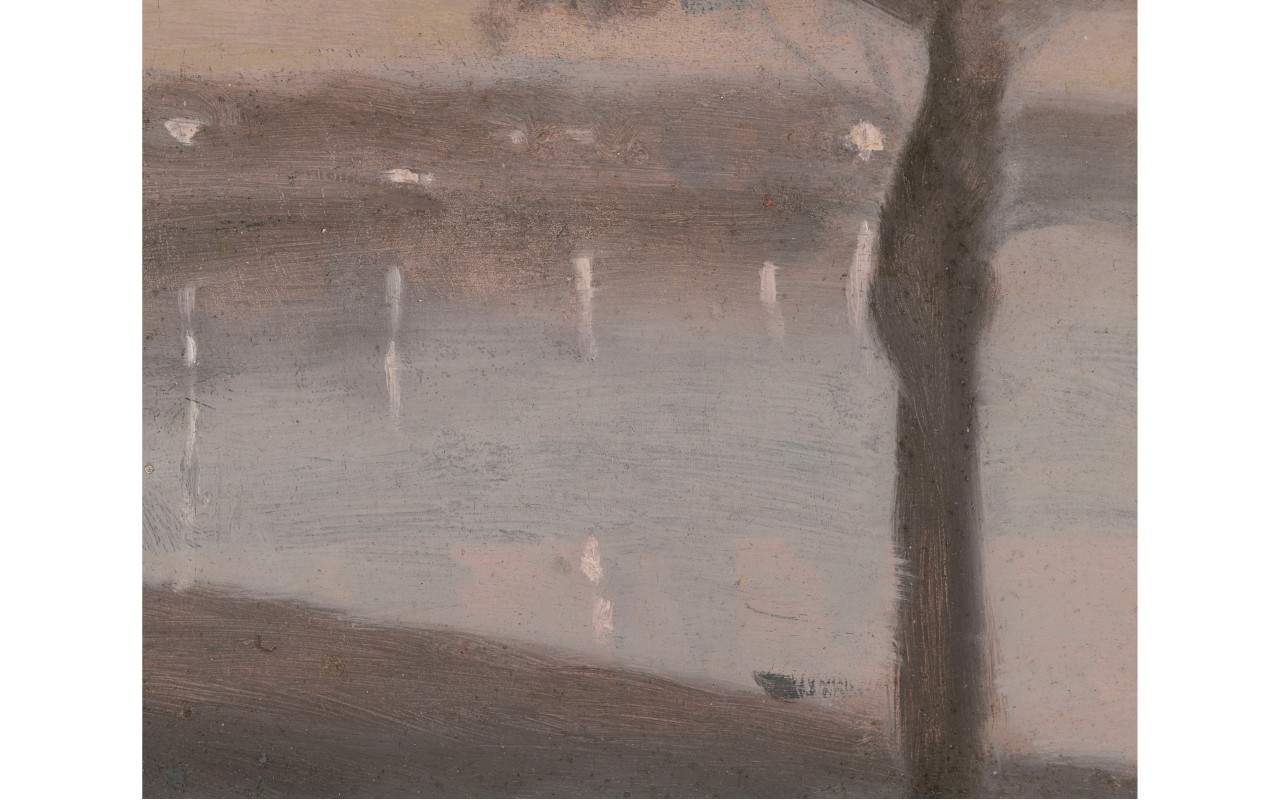 Max Meldrum believed that the tonal values (areas of dark and light) of a subject were of utmost importance and privileged them over detailed draughtsmanship or the use of colour. Despite being criticised for it, Beckett embraced Meldrum’s theories and her work shows his influence in their limited colour and handling of tone.

In Reflected lights, Beaumaris Bay (c.1930-31), seen above, through an economy of brushstrokes and paint, Beckett has captured the hazy quality of her nocturnal coastal scene. Here Beckett records the atmosphere and unique evocation of the reflected lights rather than focusing on details.

In Evening on the Yarra (c.1930), seen below, Beckett has used a series of bands of subtly distinguished tones to represent the transition from water to sky, resulting in an atmosphere that appears as an abstract zone. [1]

Beckett exhibited with the Victorian Artist Society from 1918 and with the Meldrum School Group from 1919-1921 and held her first solo show at the Athenaeum Gallery in 1923 which she continued to do yearly until 1932. She also exhibited with the Twenty Melbourne Painters annually from 1923-1935. 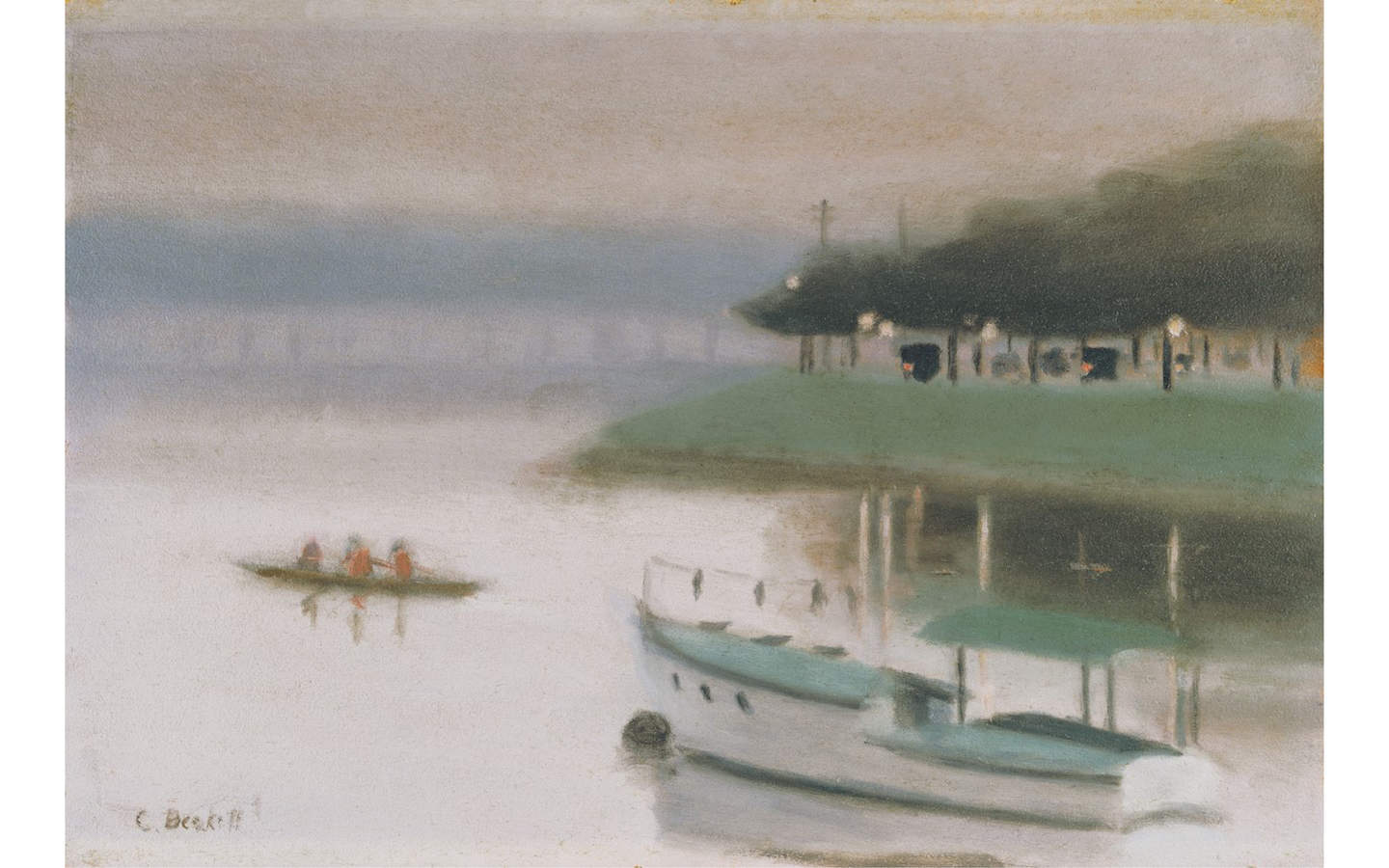 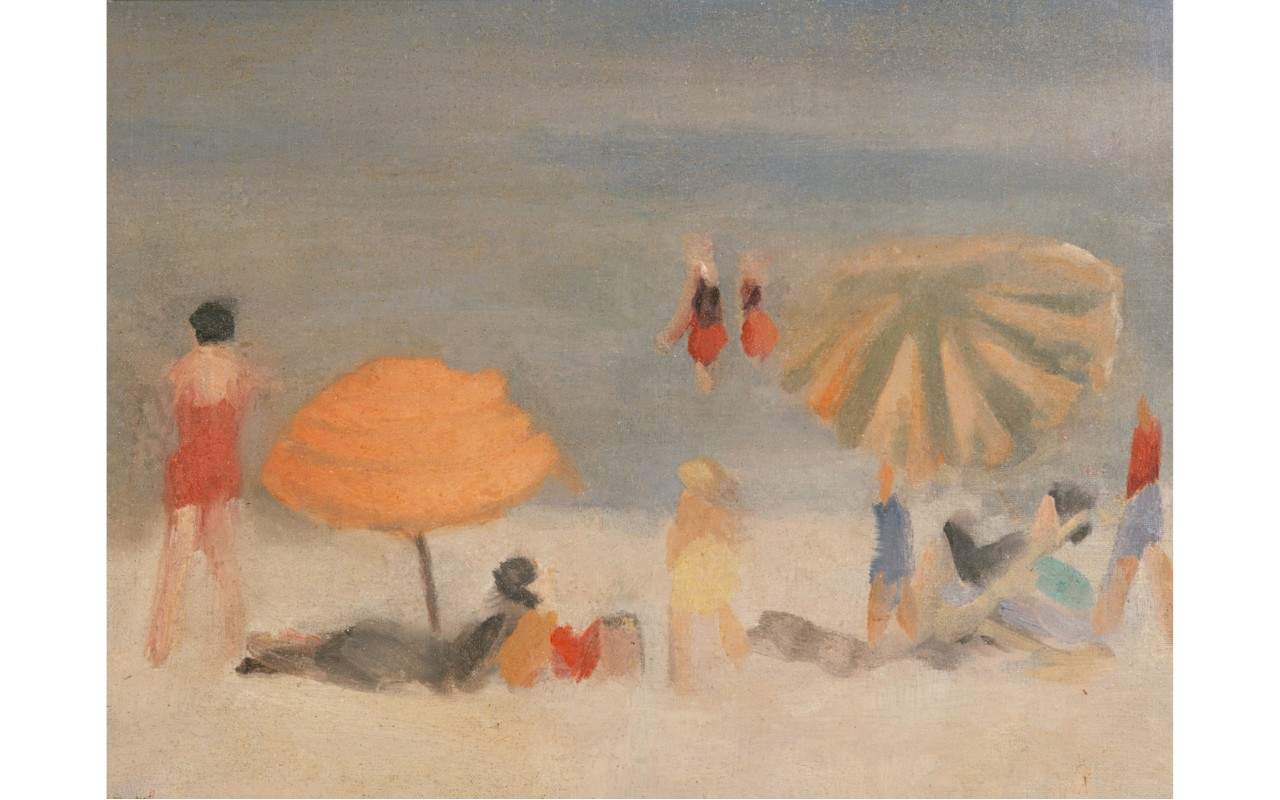 In 1919, her father retired due to ill health and the Beckett family moved to the Bayside suburb of Beaumaris, living in a newly built weatherboard house on the corner of Beach Road and Tramway Parade. Built without any consideration for Clarice’s painting practice, the new house had no space for an art studio, however she cleverly constructed a small cart which would hold her easel and painting equipment which she could transport to the sites she was to paint around the area. She had a relentless work ethic, painting most days of her life and became a known character in Beaumaris, wearing her dowdy art clothes as she painted the foreshore and suburban streets, occasionally selling a work to a local passer-by.[2]

Aside from a brief stint teaching art at a girl’s school in Mount Macedon in 1927 and yearly painting trips to San Remo with fellow Meldrumites, Beckett was to remain in Beaumaris for the rest of her life and many of her paintings are synonymous with the area. 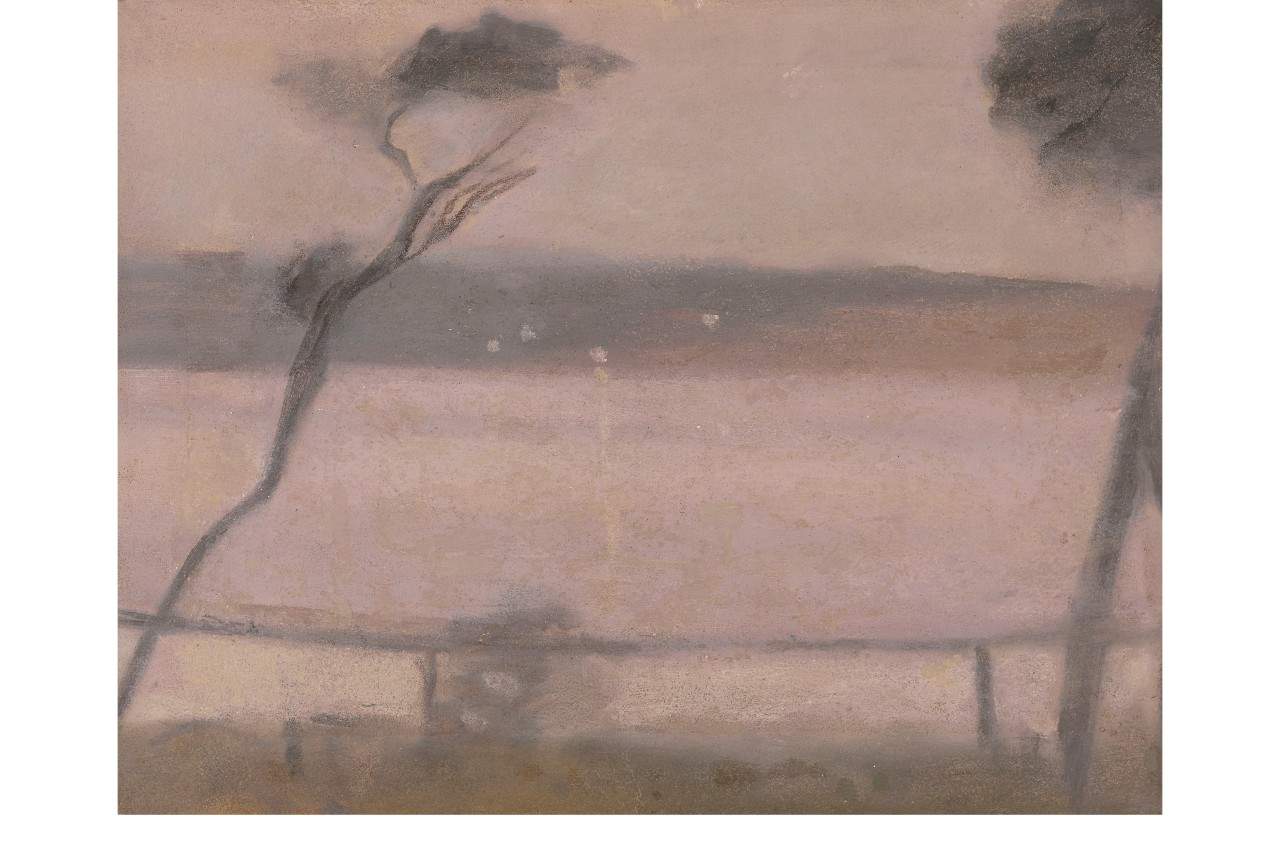 Beckett succumbed to the role of a dutiful daughter which befell many unmarried women of her generation. Domestic duties and providing care for her parents into their old age prohibited Beckett from an independent, self-determined life like the other women of Her Own Path. Despite this situation, Beckett’s commitment to painting remained and she would often paint in her free hours of the early morning and evening capturing the atmospheric light as seen above in Sunset across Beaumaris Bay (c.1930-31). 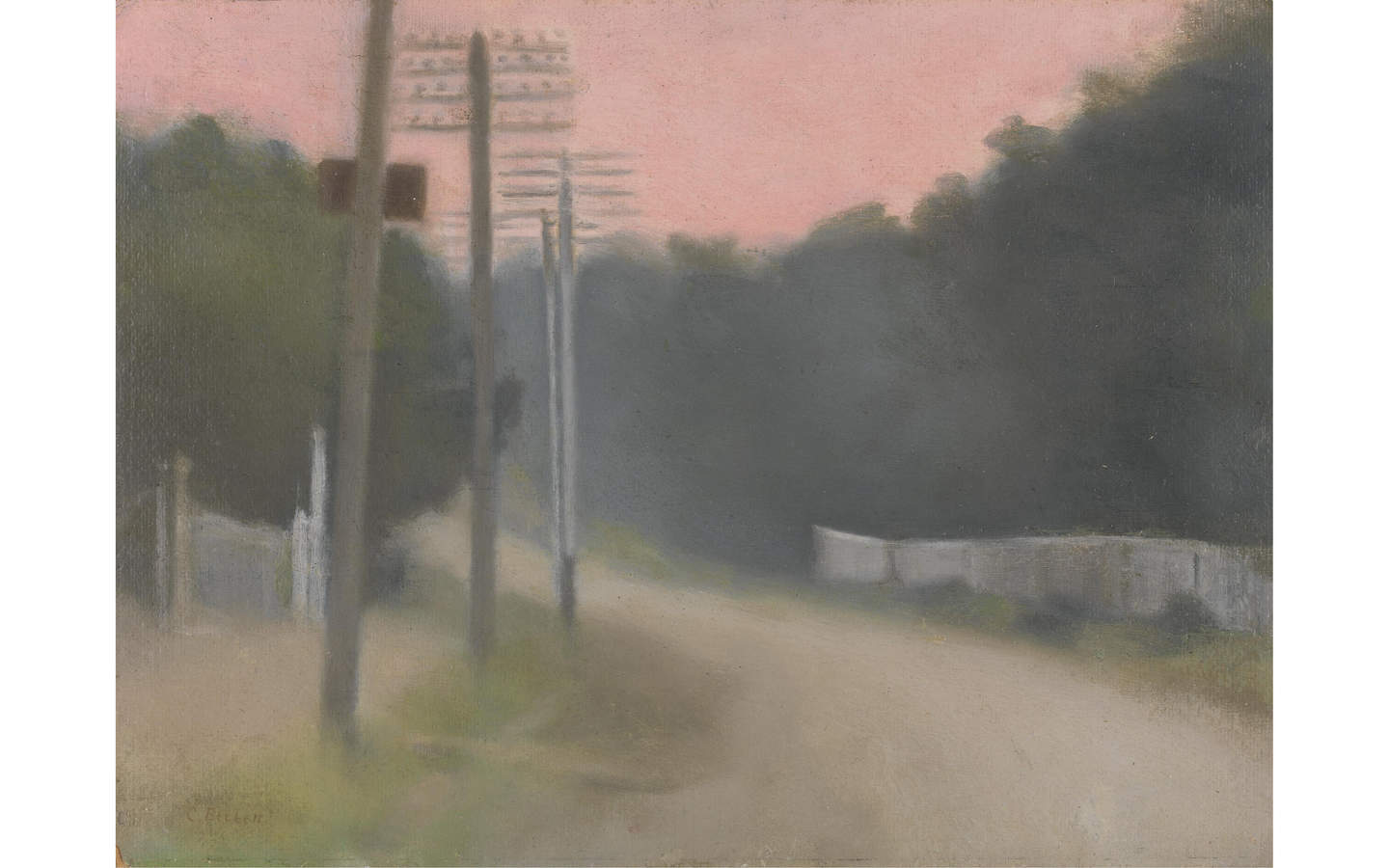 ‘For an artist of her time, and especially a woman artist, it must have been a leap of faith on her part to paint four ‘ordinary' poles as revered and exalted lyrical subject matter. This was not only innovative, it was nothing short of daring.’[3]

Painting ordinary elements of modern suburban life which included wet roads, telegraph poles, motor vehicles, bathing boxes and petrol bowsers was unique for its time. In contrast to the popular idealised views of rural landscapes often painted in panoramic scale, Beckett showed a sensitivity to beauty in the everyday in her modestly scaled paintings. In Evening light Beaumaris (c.1925), seen above, she has taken a humble telegraph pole and turned it into something worthy of contemplation. 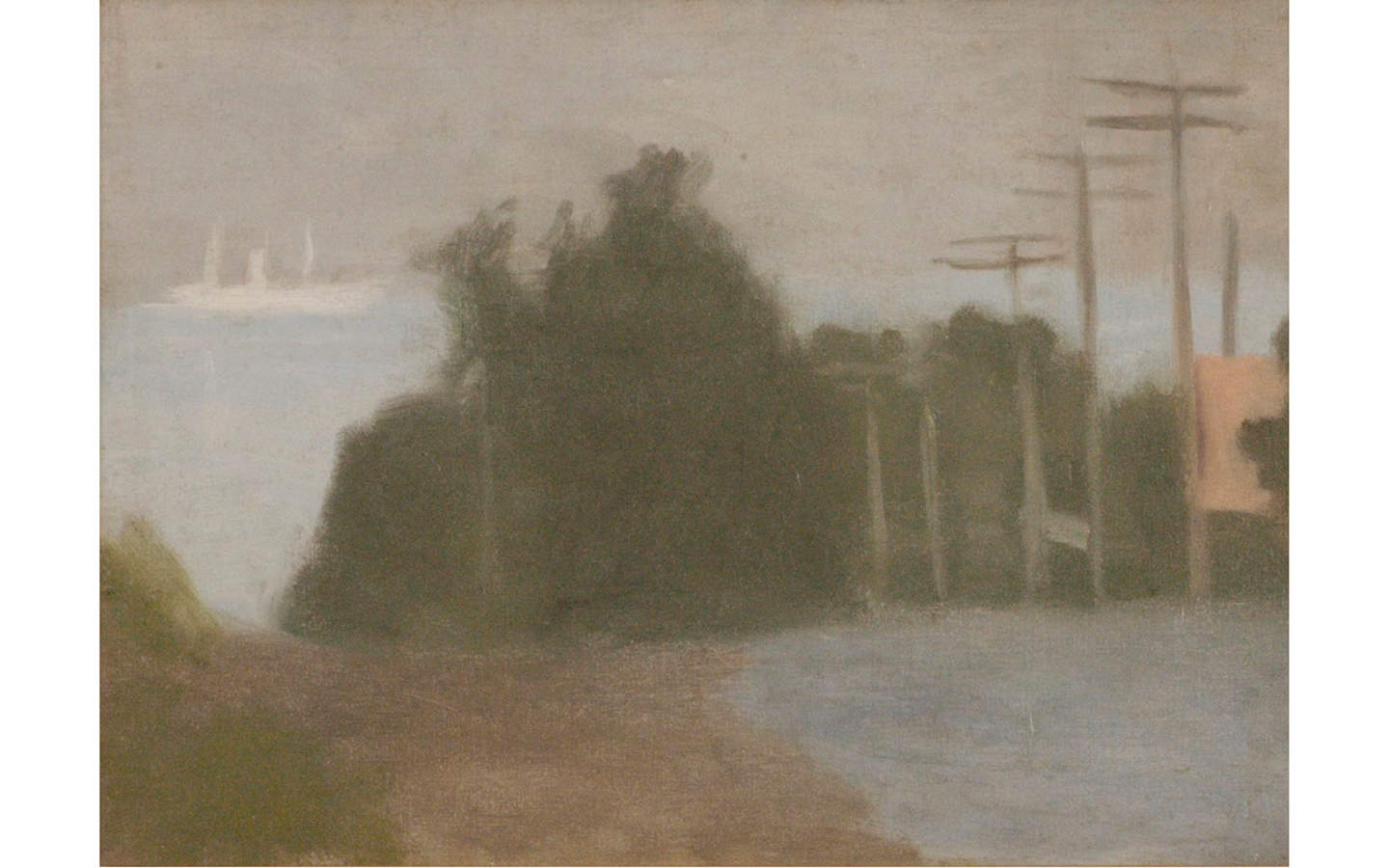 Clarice Beckett, Ship at sea or Warship on the Bay, c. 1925, oil on canvas on board, 30 x 41.2cm. Courtesy Cruthers Collection of Women’s Art, The University of Western Australia.

Sadly, having sold little and regularly disparaged by the many art critics who were hostile to Meldrum’s radical tonalism, Clarice Beckett was relatively unknown during her lifetime. After an evening of painting outdoors in a storm, Beckett caught pneumonia and died five days later on 6 July 1935 at the age of forty-eight.

Following her untimely death, she was forgotten for over thirty years until gallerist Rosalind Hollinrake’s chance encounter with the artist’s sister led to her discovery of a country barn in rural Victoria full of her works. Around 1,200 of the works had been destroyed by the elements but what remained was presented to audiences in exhibitions in 1971 and 1972.[4] This resulted in the first public acquisition of her work by the National Gallery of Australia and marked the gradual re-establishment of the artist’s reputation.

Clarice Beckett is now recognised as one of the most significant Australian women artists of the 1920s and 30s and one of the country’s most important landscape painters. Her work is in major public gallery collections across Australia. In early 2021, the Art Gallery of South Australia is staging a major retrospective of her work, Clarice Beckett: The present moment.